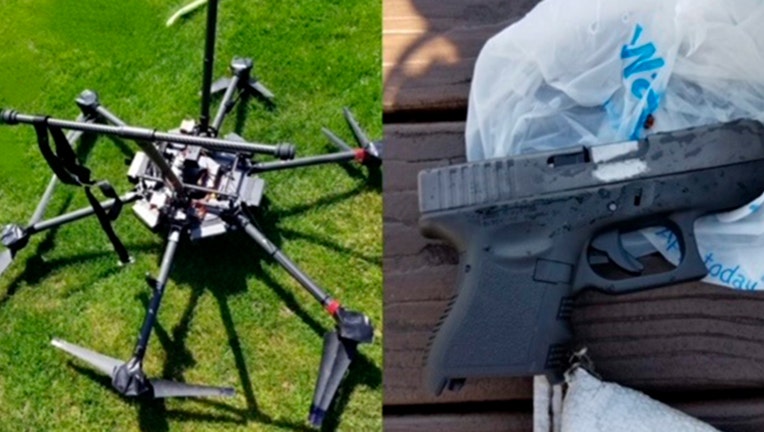 Police say a drone (right) that got caught in a tree was carrying a bag containing handguns. (Ontario Provincial Police Photos)

ONTARIO, Canada - Authorities in Canada are investigating an incident involving a drone carrying firearms over the border from the United States, police said.

Officers with the Ontario Provincial Police found a drone stuck in a tree near Port Lambton, a small community along the St. Clair River, about 60 miles northwest of Detroit. The drone was carrying a bag containing 11 handguns, according to a police statement on social media.

"How are illegal guns reaching the hands of criminals in Canada? Recently, [police] found that drones are being used to carry the prohibited guns over from the United States," Ontario Provincial Police West Region tweeted.

Police tweeted images displaying a six-rotor drone and one firearm — a Glock semiautomatic pistol — on top of a grocery-style plastic bag.

The news outlet The Sarnia Observer reported that police discovered the drone on Friday.

This story was produced in New York.