A woman from Staten Island, New York is baffled by letters and unemployment money from California’s Employment Development Department that keep showing up at her home, despite having no connection to the state.

OAKLAND, Calif. - A woman from Staten Island, New York is baffled by letters and unemployment money from California’s Employment Development Department that keep showing up at her home, despite having no connection to the state.

Cara Hitt has never been to California in her life. She has no family in the Golden State. She’s a New Yorker through and through. But so far she’s received more than a dozen letters or debit cards from EDD in her East Coast mailbox.

“At first I thought it was just junk mail. There were about three or four and I just threw them out,” Hitt said. “I didn’t realize where they were coming from until the second day when I got five more.”

She’s is not alone. KTVU has reported on many people across California who have received as many as 97 letters in their mailbox on a single day. Many times, different names appear on the envelopes and are generated from various California processing centers. This is the first time there’s proof an address has been used outside of the state.

It’s unclear why they’re coming or how the state’s system has allowed it to happen. The EDD said it is aware of the problem and suspects fraud, but has not elaborated.

The lack of transparency has led to 40 lawmakers calling for an emergency audit. Also, Gov. Gavin Newsom initiated an investigation into the inefficiencies and problems surrounding EDD. 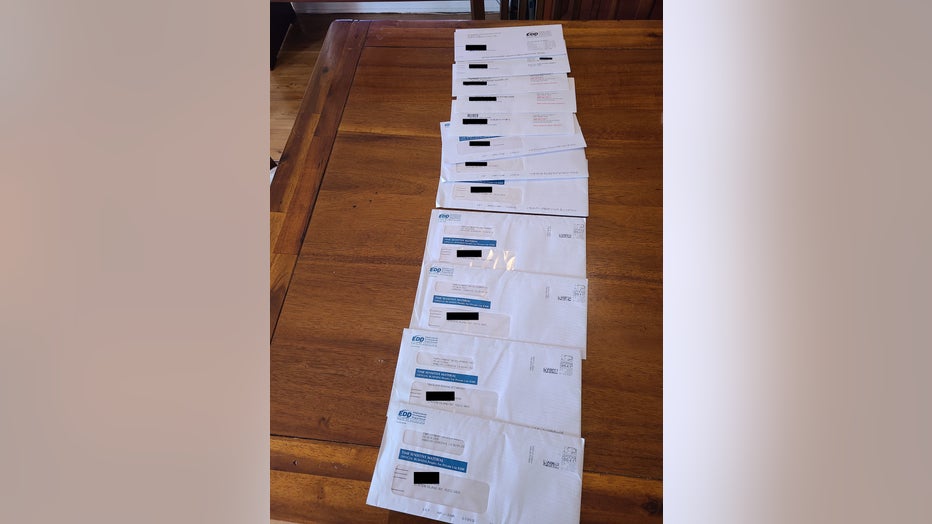 At least a dozen letters from the EDD, including debit cards for different people, have arrived in the mailbox of a woman in Staten Island, New York who said she's never been to California, let alone applied for unemployment benefits in the state.

While it’s not known how many unemployed Californians are still waiting for relief, there’s a growing list of people getting mail with other people’s names on it day after day.

“These five people haven’t lived at my address and couldn’t have lived here in the last 10 years,” Hitt said. “Then the third day we got even more, so I started to look into it.”

When she opened the letters she found Social Security numbers, debit cards and in one case, information that said the person would receive more than $17,000 in unemployment benefits.

Hitt doesn’t know how much money is on each debit card and tried contacting the number on the cards to let the EDD know. For now, the envelopes sit fanned out on her kitchen table as four more just arrived in the mail today.

“I just thought this is crazy. That’s a lot of money for California to be sending to one address in New York for multiple people."

“I just thought this is crazy,” she said. “That’s a lot of money for California to be sending to one address in New York for multiple people. Not one or two people but like nine.”

After having no luck contacting EDD, she decided to post her experience on Facebook, but didn’t get much useful information. Then, when she Googled about the EDD mail, a KTVU story popped up regarding fraud.

EDD said last week it is “aggressively fighting fraud in the wake of unscrupulous attacks on the unemployment program” and claimed fraudsters were using stolen identity information from national and global data breaches.

The state did not say which data breaches or how it knows that’s the source of the fraudulent information, however, EDD said it is working with local, state and federal agencies to investigate.

“It’s a little scary to use my address for so many people,” Hitt said. “It sets a dangerous precedent for your address. How do you know your home is safe?”

The EDD said it is increasing fraud protections by no longer backdating new claims to stop criminals from targeting federal stimulus money from earlier this year and limiting claims at the same address. Still, many are still seeing mail from EDD mysterious show up – unsolicited.

“I just hope it gets straightened out because it’s a lot of money,” Hitt said.

EDD Fraud and penalties: What you need to know

RETURN BY MAIL: Or you can write “Return to Sender” on the envelope and provide it to your mail carrier. Envelopes that may contain debit cards that have yet to be activated can also be returned to sender. The cards are sent on behalf of the Bank of America from an address in Tennessee.