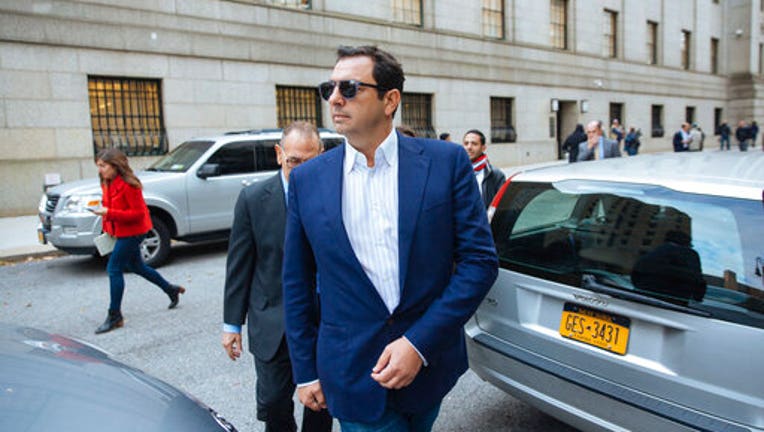 David Correia and Andrey Kukushkin are among four men charged with using straw donors to make illegal contributions to politicians they thought could help their political and business interests, including committees supporting President Donald Trump and other Republicans.

Their next court date was set for Dec. 2, though U.S. District Judge J. Paul Oetken granted a request from Kukushkin to remain in California, where a $1 million bail package limits where he can go beyond home to work, legal visits and medical appointments.

Two other men charged in the case, Lev Parnas and Igor Fruman, worked with Giuliani to try to get Ukrainian officials to investigate the son of Democrat Joe Biden. Giuliani, Trump's personal lawyer, has said he had no knowledge of illegal donations.

Prosecutors say Correia and Kukushkin teamed with Parnas and Fruman in a separate scheme to make illegal campaign donations to politicians in several states in an attempt to get support for a new recreational marijuana business.

Money for those donations was actually supplied, prosecutors say, by an unidentified foreign national with "Russian roots."

Assistant U.S. Attorney Nicolas Roos told the judge the indictment could be updated, but he made no mention of whether others might be arrested.

It was fair, he said, "to characterize the government's investigation as ongoing."

Besides the bank and search warrant records, Roos said, prosecutors have obtained emails and electronic records for over 10 accounts.

The court hearing was finished in just over 15 minutes, and lawyers and their clients declined to speak afterward.

Meanwhile, officials in California announced they would review the dozen state marijuana distribution licenses granted to a partnership involving Kukushkin to make sure there were no improprieties, the Los Angeles Times reported Thursday.

"We always have concerns when something like that happens, so we want to do our due diligence and look at them," said Lori Ajax, chief of the California Bureau of Cannabis Control.

All the state licenses issued to the partnership of Garib Karapetyan and Kukushkin are provisional permits, Ajax said, pending detailed background checks and disclosure of major investors.

Karapetyan's attorney, Brad Hirsch, said his clients are in complete compliance with all regulations.

Separately, Sacramento Mayor Darrell Steinberg called for an investigation of his city's permit system to determine how Kukushkin and another businessman obtained nearly one-third of the licenses issued by the city.

All the defendants are U.S. citizens, but Kukushkin and Parnas were born in Ukraine and Fruman in Belarus.