A bus crashed into the facade of a townhouse in Brooklyn. City inspectors are concerned about the structural integrity of the building.

NEW YORK - An MTA bus crashed head-first into a townhouse in Brooklyn on Monday afternoon.

The bus slammed into a townhouse on the corner of Lincoln Road and Bedford Avenue in Prospect-Lefferts Gardens just before 2 p.m., officials said.

EMS personnel treated at least 16 people at the scene, the FDNY said.

Video shared on Citizen.com shows a damaged black pickup truck next to the bus, which came to a stop in the facade of the building. It isn't clear if the pickup truck was moving or if it was parked. The video shows significant damage to several windows and the stonework on the house.

The FDNY initially said a tow truck was expected to pull the bus out but later said the bus was going to remain in place because of concerns over the stability of the townhouse.

An MTA bus on the B46 line crashed head-on into a townhouse on the corner of Bedford Avenue and Lincoln Road in Brooklyn.

In fact, inspectors and engineers from the Department of Buildings "found that the bus impacted the front of the two-story plus basement building, causing structural damage to the front facade at the first floor and basement level, and damage to an internal loadbearing masonry wall," a department spokesperson told FOX 5 NY.

"Our investigation determined that the structural stability of the building is compromised, and the building is no longer safe to occupy. As a result, we have issued a Full Vacate Order for the entire building," spokesperson Andrew Rudansky wrote in an email to FOX 5 NY. "All residential tenants in the building that were affected by the Vacate Order have been offered emergency relocation assistance." 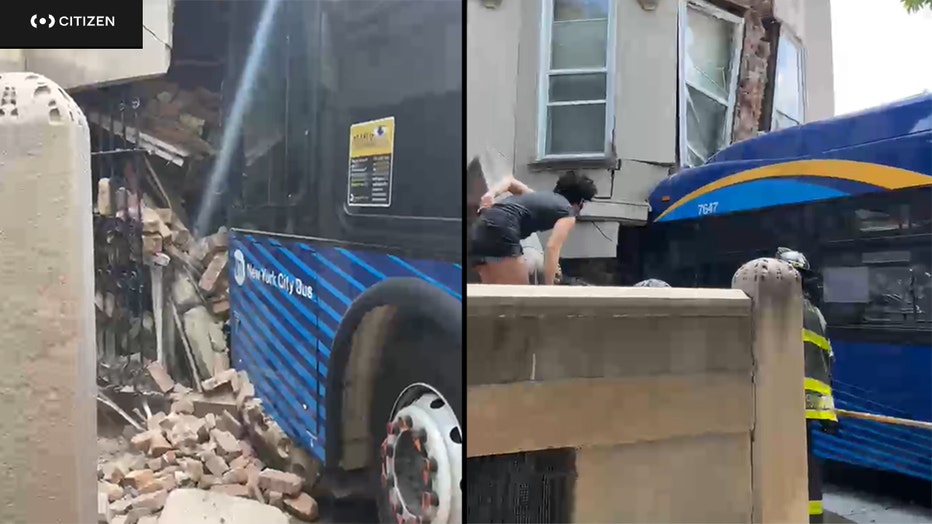 These screenshots from a video show an MTA bus crashed into the front of a townhouse in Brooklyn, Monday, June 7, 2021. (Via Citizen.com)