Vincent and Leslie Hynes are brothers who also served in the Navy during World War II. Officials in Madison, New Jersey, honored the veterans for their service.

MADISON, N.J. - Vincent Hynes, 94, was just 19 when he stepped foot on the beaches of Normandy as a Navy diver on D-Day.

He and his brother Leslie, who also served in the Navy during World War II, were honored at a ceremony in Madison, New Jersey, 75 years after that fateful day.

"You stepped forward during World War II, you stepped forward knowing you were going to battle. You both defended our freedom," Mayor Bob Conley said. "Vince, you found yourself in the most important battle in the history of the free world, as part of the D-Day invasion."

In June, Vince traveled to France to be honored on D-Day's 75th anniversary. But he said he was just as humbled to be honored closer to home in Madison.

"Madison, New Jersey, has treated me like I was born here," Hynes said.  "I cannot get over it. Everybody in this town, they go out of their way to thank me."

The brothers were lauded by Congresswoman Mikie Sherrill, herself a Navy veteran.

The brothers' names were engraved on brick pavers and placed along the Military Memorial Pathway in James Park, near the town's World War I and 9/11 memorials.

"It's important to us to make sure people remember vets and understand what their sacrifice was," said Rob DeBasse, a local resident and the chairman of the Patriotic Celebration Committee. 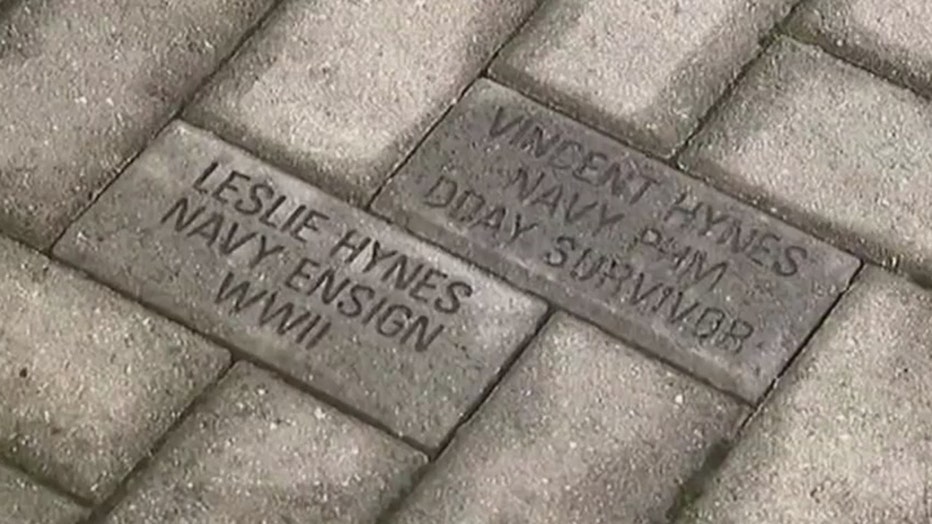 The names of Leslie Hynes and Vincent Hynes were engraved on brick pavers along the Military Memorial Pathway in James Park, Madison, New Jersey. (FOX 5 NY)