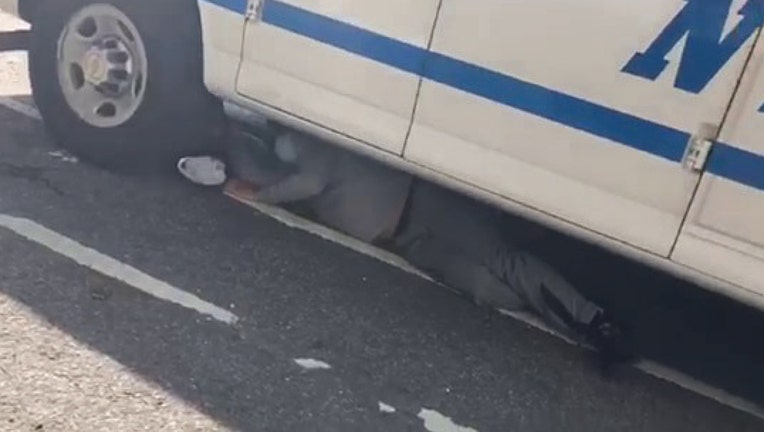 Federal authorities say this man crawled underneath an NYPD van in Sunset Park, Brooklyn, on July 17, 2020, and damaged a component of the antilock braking system. (U.S. Department of Justice document)

NEW YORK - A Black Lives Matter protester from Brooklyn has pleaded guilty to trying to cut a brake line of a New York City police vehicle a few days after he participated in a protest outside a courthouse and told a police informant that peaceful demonstrations don't achieve enough.

And in an unrelated case, he also admitted to defrauding the federal government's coronavirus pandemic relief program by lying about owning a car wash in order to cash in on a small business loan and a grant, the Justice Department said.

Jeremy Trapp, 24, pleaded guilty to one count of destruction of a vehicle and one count of wire fraud before a magistrate judge in federal court in Brooklyn on Friday.

"With his admissions of guilt today, Trapp will face the consequences of his flagrantly lawless and fraudulent conduct, first, in endangering the lives of police officers by sabotaging one of their vehicles, and second, by lining his pockets with stolen government funds intended to provide relief during the COVID-19 pandemic," Acting U.S. Attorney Mark Lesko said in a statement. "This Office and its law enforcement partners will bring to justice any individual who deliberately jeopardizes the safety of the police and steals funds from government programs intended to help deserving recipients." 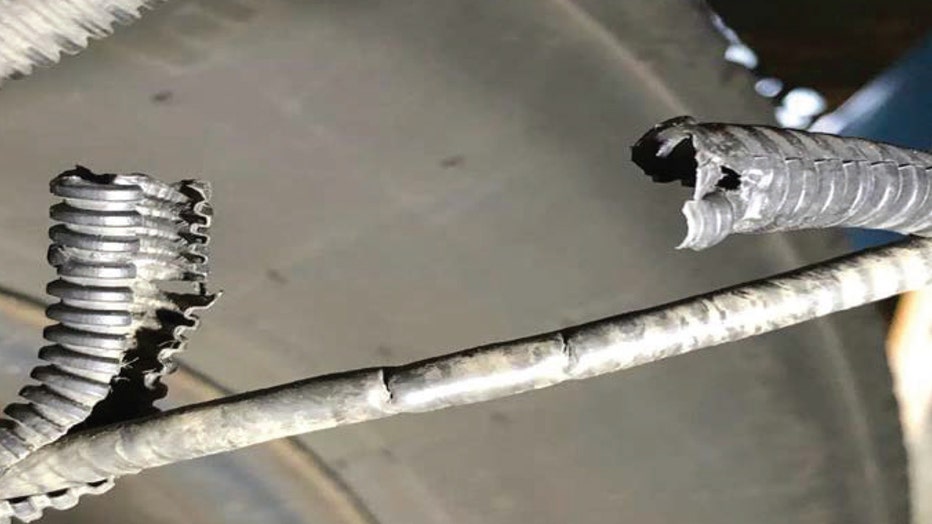 This is how Trapp's sabotage plan unfolded, according to the feds.

After attending a protest in Downtown Brooklyn on July 13, Trapp met with someone and said he wanted to hurt cops because he believed they're racist, according to an FBI agent's affidavit filed in federal court. The person Trapp met was actually a paid confidential source for the NYPD, the affidavit said.

Over the next few days, Trapp and the informant texted and then met in person, federal authorities said. Trapp told the source that the protests unfolding around the city in the wake of the killing of George Floyd in Minnesota weren't accomplishing anything, the FBI said, so he wanted to cut the brake lines of a police vehicle.

On July 17, Trapp and the police source found an NYPD van parked near 4th Avenue and 42nd Street in Sunset Park, the affidavit said. While the informant pretended to be the lookout but actually recorded video, Trapp crawled under the van with a clipping tool to cut a brake line, authorities said. However, he damaged the speed sensor line, which looks similar to a brake line.

Police arrested him the same day but the case soon went federal.

Federal prosecutors said that a month earlier, Trapp applied for relief under the CARES Act. He claimed that he owned a car wash that employed 10 people and had pulled in $150,000 in the 12 months prior to the rise of the pandemic, federal authorities said. Based on that application, the Small Business Administration approved a $42,500 loan and a $10,000 grant.

But the address he listed for the car wash turned out to be his home, which is an apartment building, not a car wash, the feds said.