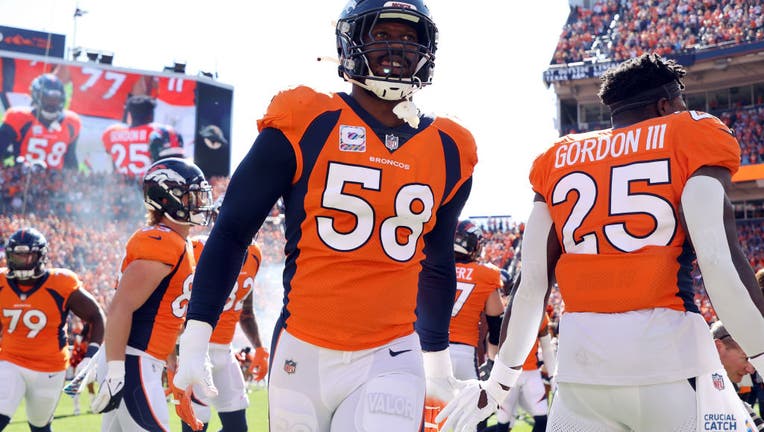 ENGLEWOOD, Colo. - The trade began to hit Von Miller as he toddled past the photo gallery of great moments that decorate the Denver Broncos headquarters.

The featured shot is the one of him knocking the ball and, in effect, the Lombardi Trophy, from Cam Newton’s grasp five years and nine months ago.

"Always have Super Bowl 50," a choked-up Miller said on a gray Monday morning as snowflakes danced into the black Cadillac Escalade’s open back window and melted on his tie-dye hoodie.

"Seeing the pictures as I was walking out made me tear up."

Miller is no longer the face of the franchise in Denver.

The loquacious linebacker is headed West to join Aaron Donald and Jalen Ramsey with the Los Angeles Rams in a trade that surprised him.

Where a Super Bowl contender awaits.

"Great team. Been a huge fan of Aaron Donald for a long time," Miller said. "They’ve got a great defense. Jalen Ramsey, Leonard Floyd, all these guys. I’m excited."

Two people familiar with the deal that wasn’t immediately announced by either team told The Associated Press that the Rams are sending the Broncos second and third-round picks in the 2022 draft for the perennial Pro Bowler.

The Broncos also are picking up $9 million of the $9.722 million left on his contract.

Miller’s trophy case includes his Super Bowl 50 MVP award for leading Denver to a 24-10 win over heavily favored Carolina following the 2015 season and 2011 NFL Defensive Rookie of the Year honor.

He’s an eight-time Pro Bowl selection, seven-time AP All-Pro and a member of the league’s 2010s All-Decade team. And he’s the Broncos’ franchise leader with 110½ sacks in the regular season and has another 6½ in the playoffs.

"It’s hard to put the emotions into words," Miller said. "It’s always tough whenever you leave. I love all my fans. I love Broncos country. When I said Broncos for life, I meant that. It was an honor and a privilege to play here.

The Rams summed it up quite succinctly.

" We’re all in," the Rams (7-1) tweeted along with a meme of actor John Malkovich splashing the pot at the poker table.

And it looks as though the Broncos (4-4) are folding their hand.

With Miller watching from the sideline because of a sprained ankle he said should be fine by next weekend, the Broncos edged Washington 17-10 Sunday, narrowly avoiding their first winless October since 1967.

In between Teddy Bridgewater inexplicably throwing an incompletion to stop the clock with 32 seconds left and saving Washington a timeout, the Broncos fumbled twice, losing the second one at their 24 with 21 seconds remaining.

That served as a fitting farewell to Miller, who never got back to the playoffs with Denver after leading their Super Bowl parade.

Plagued by instability at quarterback, unimaginative offensive play-calling, draft busts and free-agent flops, the once-proud franchise is mired in one of its longest runs of mediocrity since the 1960s.

"This team, they’re going to start winning soon," Miller said. "I wanted to be a part of it to fix it."

Miller joins a Rams team that’s tied with the Packers and Cardinals for the NFL’s best record at 7-1. But the path to the Super Bowl — at the Rams’ home, SoFi Stadium in Inglewood, California — appears much rockier in the NFC with Dallas at 6-1 and defending champion Tampa Bay sitting at 6-2.

Only one team in the AFC has more than five wins: Tennessee is 6-2 but just lost cornerstone Derrick Henry to a foot injury. The Rams host the Titans on Sunday night.

Miller expects to step right into the Rams lineup after missing his final Broncos game with a sprained left ankle.

Miller, who’s in the final year of his contract, was sidelined all of last year with a dislocated ankle tendon. He had a splashy comeback, winning the AFC Defensive Player of the Month honor in September.

Despite a quiet October — save for guaranteeing he was going to destroy Cleveland’s offensive line — Miller was still considered a gem for contenders as Tuesday’s trade deadline approached.

Miller’s departure means kicker Brandon McManus is the only remaining member of the 2015 team that won the franchise’s third Super Bowl thanks to Miller’s memorable performance that cemented his legacy as one of his generation’s top pass rushers.

Miller was rewarded with a record six-year, $114.1 million contract that pays him $17.5 million this season.

Had the Broncos held on to Miller and let him leave in free agency after the season, they best they could have netted was a fifth-round compensatory pick in 2022.

In LA, Miller joins fellow stars Donald and Ramsey, the type of talent he hasn’t had around him since the Broncos were regular Super Bowl threats during Manning’s four seasons in Denver from 2012-15.

Moreover, former Broncos and Rams defensive coordinator Wade Phillips said Miller is a better fit in L.A.’s version of the 3-4 defensive scheme and should shine in sunny California.

Miller, 32, has mused all year about wanting to play several more seasons whether in Denver or elsewhere. He recently became a father and said he wants his boy to see him play in a few years.

He repeatedly refused to fret over his football future, saying he was "at peace" with whatever happens.

"Somebody told me once if you want to make God laugh, then make plans," Miller said before rolling up his window. "Had a lot of beautiful years here. Have a lot of great memories here."