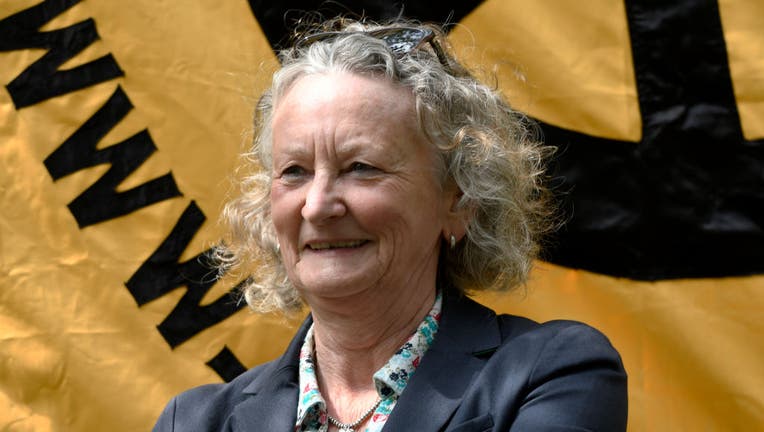 TAVISTOCK SQUARE GARDENS, LONDON, GREATER LONDON, UNITED KINGDOM - 2019/08/06: Baroness Jenny Jones seen during the commemoration.People gather for the 74th Hiroshima annual commemoration of the atomic bombing in 1945. A one hour ceremony was perform

A left-wing British baroness suggested a 6 p.m. curfew for men to make "women a lot safer" on the streets of London during a debate in the U.K. Parliament’s House of Lords Wednesday.

"In the week that Sarah Everard was abducted and, we suppose, killed -- because remains have been found in a woodland in Kent -- I argue that, at the next opportunity for any bill that is appropriate, I might put in an amendment to create a curfew for men on the streets after 6 p.m.," she said during a debate on domestic violence. "I feel this would make women a lot safer, and discrimination of all kinds would be lessened."

"I responded to local police telling women not to go out alone at night by turning the idea on its head," Jones later explained in a Facebook post.

Everard went missing on the evening of March 3 in London after leaving her friend’s house in London’s Clapham neighborhood to walk to her own home in Brixton, about 2 miles away, according to the city’s police department.

A Metropolitan Police officer has been arrested in connection with Everard’s death on suspicion of kidnapping, murder and indecent exposure, police said.

"I speak on behalf of all my colleagues in the Met when I say we are utterly appalled at this dreadful news," Metropolitan Police Commissioner Cressida Dick said during a news conference Wednesday. "Our job is to patrol the streets and to protect people."

She stressed that it is "incredibly rare for a women to be abducted" on the city’s streets.

"But I completely understand that despite this, women in London and the wider public - particularly those in the area where Sarah went missing - will be worried and may well be feeling scared," she added.

Local media identified the officer as Wayne Couzens, who worked on diplomatic duty stationed at the U.S. embassy. His wife, Elena, was arrested on suspicion of assisting an offender, the Sun reported.

Human remains were discovered at a golf course in Kent, where Everard was last seen, but authorities have not yet publicly identified them.

After video emerged of Jones’ comments, #CurfewForMen emerged on Twitter.

"Since my comments about a curfew for men to keep women safe, I've had a deluge of misogynistic emails and tweets," the baroness later tweeted. "Which rather proves my point about the problem being with men."