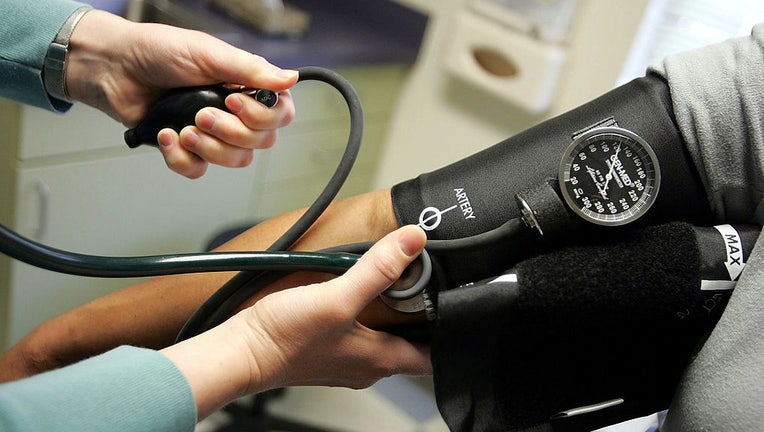 FILE- A doctor reads a blood pressure gauge during an examination of patient. (Photo by Joe Raedle/Getty Images)

Exercise is one of the most effective ways to build muscle and stay healthy. But new research examines how training your breathing muscles can help lower your chances of high blood pressure.

Researchers at the University of Colorado worked with volunteers between the ages of 18 and 82 for their study to try a daily five-minute breathing technique using a device called PowerBreathe, a hand-held machine resembling an inhaler. When people breathe into the device, it provides resistance, making it harder to inhale.

"The main finding was lowering blood pressure. We did measurements of how healthy blood vessels are and we looked at cellular and molecular levels. We discovered that individuals’ arteries are functioning and healthier," Craighead said. He added that the research team observed test subjects who used the breathing device had lower blood pressure levels.

"Fiona Bailey, a professor from the University of Arizona, researched sleep apnea and noticed that some patients had lower blood pressure rates. So in conjunction with Dr. Bailey’s research, my team did the breathing study looking at ways to enhance your breathing to reduce high blood pressure."

"We looked at a device you can use when you inhale to help with your breathing. Thirty breaths a day needs to be done with some type of device to provide resistance," Craighead said. "These breathing devices are valves, and it's hard to get the intensity with breathing without the help of the device."

Craighead offers additional breathing techniques that people can do if they don’t have a breathing device. "I think the main technique involves slow deep breathing, inhaling for four to five seconds and using six breaths a minute for exhaling, along with relaxation and slow breathing for 30-minute intervals each day."

The professor also explains that breathing techniques should be performed whether or not you have a device. However, it should not replace exercise, but complement it.

The CDC lists five surprising facts regarding high blood pressure to be aware of.