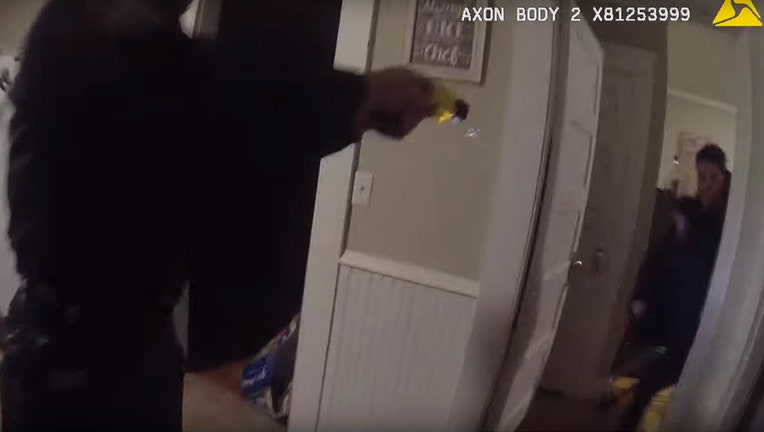 Officers confront a man armed with a knife in Ansonia, Conn., on Jan. 3, 2020. This still image is taken from a police body camera video. (Connecticut State Police)

ANSONIA, Conn. - Police body camera videos released Monday show a Connecticut man running at officers with a knife, the man refusing orders to drop it and one of the officers fatally shooting him.

The videos of the shooting by an Ansonia officer on Thursday confirm details released by state police over the weekend.

The videos also show Michael Gregory, 30, telling police at the beginning of the encounter, "You're going to have to shoot me to arrest me."

"This footage is just one part of the on-going investigation," state police said in a statement. "Detectives from the Western District Major Crime Squad will continue to investigate this incident."

The Chief Medical Examiner's Office said Monday that Gregory died of a gunshot that perforated a lung and classified his death as a homicide.

Three officers responded to the home of Gregory's estranged girlfriend on Thursday. She reported that Gregory was at her home in violation of a no-contact order issued by a judge following a domestic violence arrest in November, Ansonia Police Chief Andrew Cota III said.

The videos show Officer Brendon Nelson fire a stun gun at Gregory as he comes into the kitchen, and the stun gun appears to have no effect. Officer Wojciech Podgorski then fires his gun three times as Gregory comes around a table at the officers. Sgt. Christopher Flynn also was in the house.

The videos were released under a new state law that took effect Oct. 1. It requires police to give officers involved in a use-of-force incident 48 hours to review videos before they are released to the public. If officers don't request the videos, they can be released 96 hours afterward.