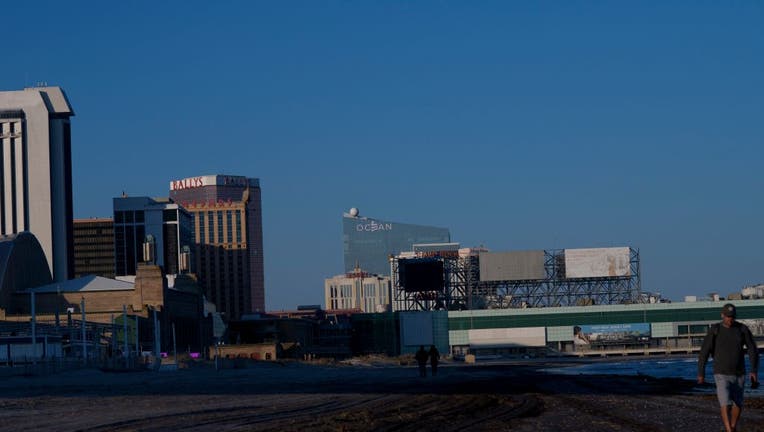 People walk on the beach at dusk during the coronavirus pandemic on May 7, 2020 in Atlantic City, New Jersey. (Photo by Mark Makela/Getty Images)

ATLANTIC CITY, N.J. (AP) - The words “Black Lives Matter” will be written large in a public place in Atlantic City on Friday — just not where some demonstrators originally hoped.

What had originally loomed as a potential confrontation pitting people protesting racial injustice against city officials determined to prevent the gambling resort's Boardwalk from being painted could now be headed for a more peaceful conclusion.

Steve Young, a community activist who had announced plans for a protest in front of Boardwalk Hall, in which the words “Black Lives Matter” would be painted onto the wooden walkway, said Thursday no one would attempt to do so.

“We will not be painting anything on the Boardwalk,” he said in an interview. “We want everyone to stand with us in peace and non-violence.”

The words will instead be written on Martin Luther King Jr. Boulevard.

Young said the event he organized will still be held at 1 p.m. He said he will then participate in the city-sponsored event at 2:30 p.m. in which the slogan of the racial justice movement will be painted in large letters on the boulevard in front of the Civil Rights Garden.

“We don't want this to just be a photo opportunity,” Young said. “We need to improve our community. The poverty rate in Atlantic City is 40%. That says that black lives don't matter to a lot of people.”

Small, who is Black, said he organized the city event as “a better way” to support the Black Lives Matter movement.

“All lives matter,” he said. “But in order for all lives to matter, Black lives have to matter, too.”

There have been three racial justice demonstrations in Atlantic City this year. The first, on May 31, was followed by theft and property destruction for which about 100 people were charged. A second on June 6 was peaceful.

Young organized the July 4 protest as the casinos were permitted to reopen after more than three months of being shut due to the coronavirus outbreak. He was among seven people arrested when marchers tried to block the entrance of the Atlantic City Expressway, the main route to the city and its casinos.

The city is trying to strip Young of two city posts he holds as a consequence of the July 4 protest, whose stated goal was to “shut the city down.”