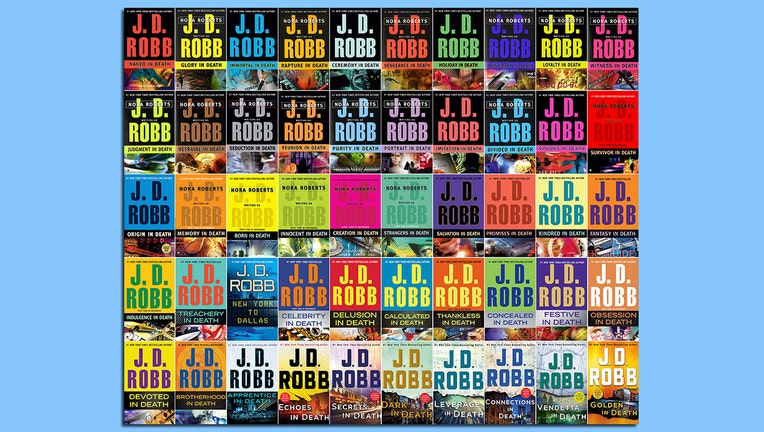 The cover images of 50 books in the "In Death" crime series written by J.D. Robb, a pseudonym used by author Nora Roberts. (Berkley/St. Martin's Press via AP)

When you binge-read an entire 50-book series over five months, coming to the end feels like the final days of an amazing trip: You don't want it to end, and at the same time you want to get back to your life.

I started reading J.D. Robb's "In Death" series — a futuristic police procedural set in the mid-21st century — when I was in desperate need of escape. It was mid-August and, as an Associated Press editor, I had been through a particularly difficult news cycle: a mass shooting in Dayton, Ohio, followed by Jeffrey Epstein's suicide. My mind was teeming with the details from both stories, and I was burnt out. I felt like I could only get to a quarter tank of gas, and every time a half tank was in view, my energy would get depleted again.

I had been on a good reading kick, ripping through some spectacular books including Tayari Jones' " An American Marriage " and Tara Westover's "Educated." But I was looking for something lighter, more of a beach read. A friend described a series she had recently started — page-turning murder mysteries paired with a storybook love story — and said it might be a good fit for me.

Five months and 50 books later, I can say it definitely was.

My bingeing streak just ended with the 50th book, " Golden in Death," which was released this month.

The "In Death" series is far from light reading. It centers around the life of Eve Dallas, a no-nonsense New York City police lieutenant. She's a homicide cop, so there is murder in every book.

There's the one where two lovers who think of themselves as a modern-day Bonnie and Clyde leave a trail of death, with their initials carved into their victims' bodies. There are the ones tinged with terrorism: A young sniper trained by her drugged-out, former-cop father turns people into murder-minded zombies. Many of the books deal with rape, sexual assault or abuse, for more of a "Law & Order: SVU" vibe. And some are haunt-your-dreams scary.

J.D. Robb is the pen name for the prolific romance writer Nora Roberts, who started writing the series in 1995 and releases at least two new titles a year.

In the very first book, "Naked in Death," we are introduced to a slew of what become recurring characters: Eve's former partner and trainer, who becomes a father figure; the esteemed police commander; the maternal staff psychiatrist; Eve's criminal-turned-singer bestie; and most importantly, Roarke.

The sexual tension leaps off the page when Eve meets Roarke, who is rich, handsome and happens to be her prime suspect. Eve's moral code is black and white, which causes friction throughout the series with Roarke, who becomes her husband by the fourth book.

Roberts spends a lot of time building layer upon layer of intimacy into their relationship, so their partnership is believable while still being the epitome of #couplegoals. Their relationship is one of the things I loved most about the series, and miss most now that I'm caught up.

So what happens when you plunge into a 50-book series? Here are five things I learned:

I lost touch with reading for a good chunk of my 20s. I blamed it on school, and then on my job. But getting back into a reading routine has done wonders for my life, and my brain. Reading requires undivided attention. You can't really read a book while you're texting someone or scrolling through Instagram or participating in any bad habits you're trying to kick.

About 10 books in, when I noticed I was starting to rip through a book a day, I started wondering: Was reading this much another bad habit?

Nervously, I asked my therapist about this obsession, admitting that most of my free time was spent escaping into Eve's world. My therapist said something like, "Of the compulsive habits to have, this seems relatively harmless, and maybe you really need it. It's only a problem if you start turning down social interactions or find it is interfering with your daily life."

I've always been inclined to binge. The medium doesn't matter — TV show, book, podcast — once I'm hooked, I need to know everything. Like that time I watched the entirety of "Gilmore Girls" in two months.

I read these books everywhere I went, using peripheral vision as I walked through the corridor to my office every morning, narrowly avoiding running into people. I would sneak in five minutes when the subway was delayed. I'd curl up on the couch with my cat on a rainy afternoon, fall asleep most nights with a book in my hand, read on the beach on vacation.

After meeting a colleague for the first time recently, she said, "You're the book woman. It's so good to finally meet you."

Crazy book lady, at your service.

At 29, I'm not old, but I somewhat comically injured myself at least twice while reading the "In Death" series.

The first happened about 10 books in, when I got the strangest pain in my left pinky. It was particularly present when I would type; it felt like my finger had done one too many crunches. I was in the middle of reading when I said to my partner, "I can't figure out why my pinky hurts so much." He casually suggested it might have something to do with my new reading obsession, but I shot that down, feeling defensive.

I did notice, however, that I was holding the book like a martini glass, pinky out. Within days of changing my grip, the pain went away.

Then, toward the end of the book series, my right eye started twitching for about a week and a half. I was embarrassed, and Googled what might be the cause. Sure, I drank the occasional caffeinated tea, I probably could have gotten more sleep and I am almost always stressed. But about two days after I finished book No. 50, my eye twitch went away.

3. LIBRARIES ARE CANDY SHOPS FOR ADULTS

Rediscovering the library has been one of my favorite things about reading this series. I can't explain the excitement I would feel when I got an email notifying me that my books had come in and were ready for pickup. I loved going to get them and finding them bound together with a rubber band and marked with my initials. I would sometimes giggle when I placed a stack of 10 books on the scanner and it somehow correctly checked out all the right titles.

I only bought one book, in a moment of weakness over Labor Day weekend when I realized the library was going to be closed for four days and I hadn't ordered the next few books in time.

After that, I ordered them five or 10 at a time at the library.

It turns out I'm not the only one who loves the library. A recent Gallup poll found that Americans visited the library more frequently than the movie theater in 2019.

When you spend hours a day reading police procedurals, you start thinking like a cop, or at least how I imagine a cop thinks. I began paying more attention to details.

Looking at people on the subway, I would think about how I would describe them if I were called as a witness — their dimensions, physical attributes, clothing, tendencies — and then test myself when I got home to see if I remembered.

I'd pay attention to license plates of passing cars, though I never was able to remember those.

5. FICTION IS NOT REALITY

Over the summer, a homeless man killed four people as they slept on the streets of New York City. Telling my partner about it, I started describing what would happen if this was Eve's case.

"I think you have a problem," he replied.

There was a particularly meta moment when I was reading a book that featured characters going to the Oscars because a movie about one of Eve's cases was nominated. Later that evening, I tuned into the Golden Globes and couldn't help but make comparisons between fiction and reality. If only "The Icove Agenda'' (from Robb's "Origin in Death") won instead of "1917"…

Now that I'm caught up, I can't say I'm looking for another series to dive into. I did immediately binge "The Morning Show" because I had been neglecting my TV shows. But reading these books gave me what I wanted and needed. Just like a vacation, the series gave me a break from reality, and taught me how much I need that.