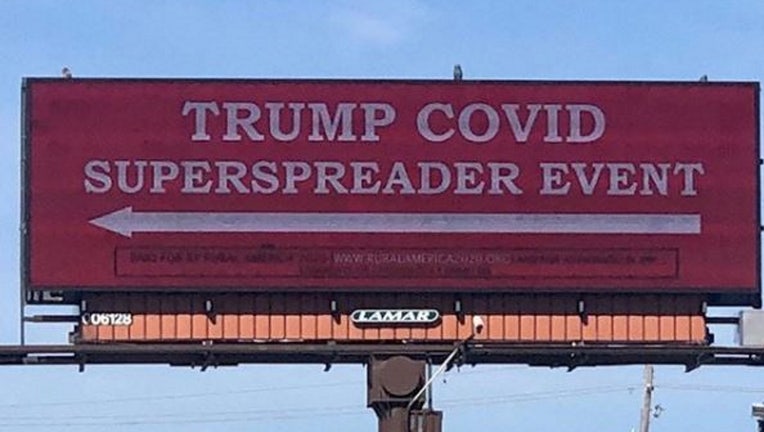 DES MOINES, Iowa - As President Donald Trump's fans head to his campaign stop in Des Moines, Iowa on Wednesday afternoon, they'll pass a large billboard that criticizes the president's handling of the coronavirus pandemic, calling the rally a "superspreader event."

The billboard is across from the Des Moines International Airport, where the president's rally is scheduled to be held at 6 p.m. Wednesday. It features a large arrow pointing toward the airport with a message that reads, "Trump COVID Superspreader Event."

The billboard was paid for by the group Rural America 2020, a nonprofit that says it advocates for policies that benefit agriculture and rural America.

Trump is heavily campaigning across the country this week, with previous stops in Florida and Pennsylvania. After his Iowa visit, he'll head to North Carolina and Georgia.

His trip to Iowa comes as the state this week surpassed 100,000 coronavirus cases and has seen a recent surge in hospitalizations. Democratic presidential nominee Joe Biden has tried to make Trump's handling of the pandemic, which has killed more than 215,000 Americans, the central issue of the election.

“President Trump isn’t coming to the Hawkeye State to offer words of comfort to those suffering, or a helping hand to the Iowans who are out of a job, or an actual plan to get the virus under control," Biden said in a statement. “Instead, he’s here to spread more lies about the pandemic and distract from his record of failure."

Officials at the Des Moines airport, where Trump's rally will be held in a cargo hangar, have been told to plan for up to 10,000 people. A public health emergency declared by Gov. Kim Reynolds, R-Iowa, in March remains in place and requires that organizers of mass gatherings “must ensure at least 6 feet of physical distance between each group or individual attending alone." Reynolds, a Trump ally, was expected to appear at the event.

The Trump campaign has grown increasingly worried about states he won handily four years ago, including Iowa, Ohio, and, to a lesser extent, Texas. He all but must win at least one of the three Great Lakes states he flipped red in 2016.

But facing stubborn deficits in Wisconsin and Michigan, the president has placed renewed focus on Pennsylvania and its 20 electoral votes.

Trump will have to run up his margins in the state's rural areas to win, as his prospects have slipped since 2016 in places like vote-rich suburban Philadelphia, where he underperformed by past Republican measures.