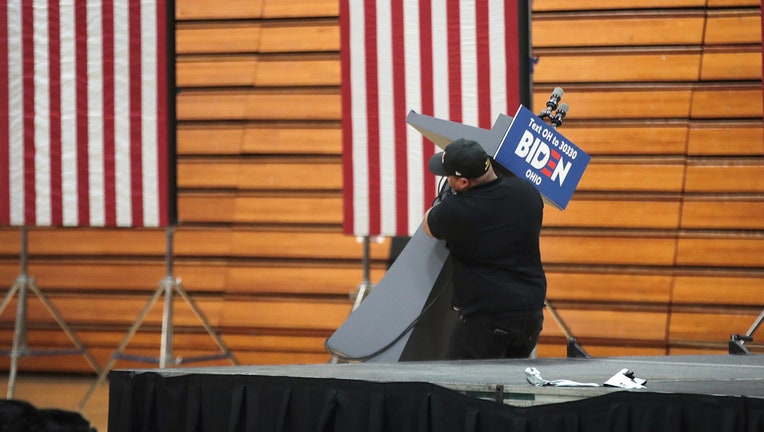 CLEVELAND, OHIO - MARCH 10: Workers begin to tear down the setup at Cuyahoga Community College where Democratic presidential candidate former Vice President Joe Biden was scheduled to appear at an election-night rally on March 10, 2020 in Cleveland,

TAMPA, Fla. - Former Vice President Joe Biden was scheduled to make a campaign stop in Tampa Thursday, March 12, but canceled the appearance due to "the coronavirus public health emergency."

His campaign says Biden will instead make remarks in Wilmington, Delaware Thursday, March 12.

The announcement comes on the same day the Biden campaign canceled a primary election-night event at Cuyahoga Community College in Cleveland, Ohio due to the concern of the spread of coronavirus in large gatherings

Also announced Tuesday, the Democratic Party decided to hold the next debate in Phoenix, Arizona, between Biden and Senator Bernie Sanders, without an audience.

And earlier today, 15 Florida mayors announced their endorsement of Biden for the Democratic presidential nominee.

With just one week until Florida’s March 17 primary, current and former mayors from across the state put their stamp of approval on the former VP.