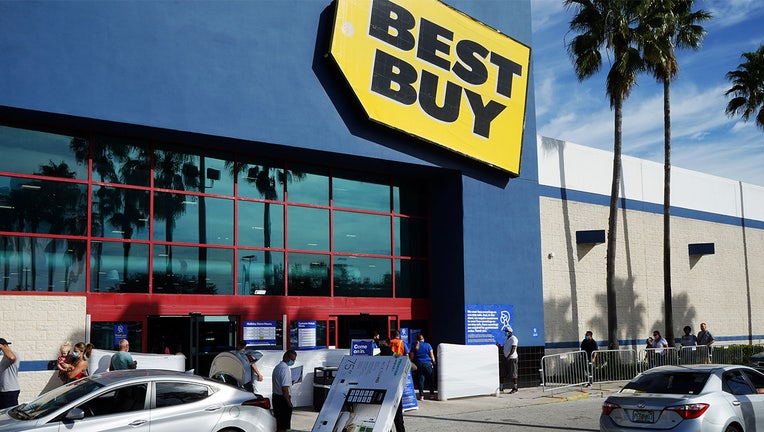 An employee brings a television to a customer's car at a Best Buy store. (Photo by Paul Hennessy/SOPA Images/LightRocket via Getty Images)

NEW YORK - Best Buy CEO Corie Barry is warning of an uptick in organized retail crime at its locations.

"I think you've probably seen in the media that across retail, we are definitely seeing more and more, particularly, organized retail crime and incidence of shrink in our locations. And I think you've heard other retailers talk about it, and we certainly have seen it as well," she explained on the company's third-quarter earnings call Tuesday.

"Our priority has always been and will remain the safety of our people, whether that's the pandemic, whether that is unruly customers, whether that is outright theft, which is a great deal of what we're seeing right now, and this is a real issue that hurts and scares real people."

In order to combat rising crime, the consumer electronics retailer is hiring security guards and working with vendors on creative ways to stage its products.

"This is traumatizing for our associates and is unacceptable," Barry emphasized. "We are doing everything we can to try to create as safe as possible environments."

Barry told reporters during a separate call that the company is seeing increases in organized theft across the country, but particularly in San Francisco. The disclosure comes as other retailers, including Nordstrom and Louis Vuitton, have been hit in a recent string of robberies by brazen thieves over the past few days.

In addition to the uptick in organized retail crime, Barry said that Best Buy continues to face shipping delays and higher costs. She also cited "pockets of constraints" in areas like appliances, gaming, and mobile phones.

"We have varying degrees of inventory and supply chain challenges every holiday season, and this year will be no different," Barry added. "But we entered Q4 with 15% more inventory year-over-year and feel confident in our ability to serve our customers throughout the holiday."

In order to address its supply constraints, Best Buy says it is "pulling up product flow, adjusting store assortment based on availability and acquiring additional alternative transportation."