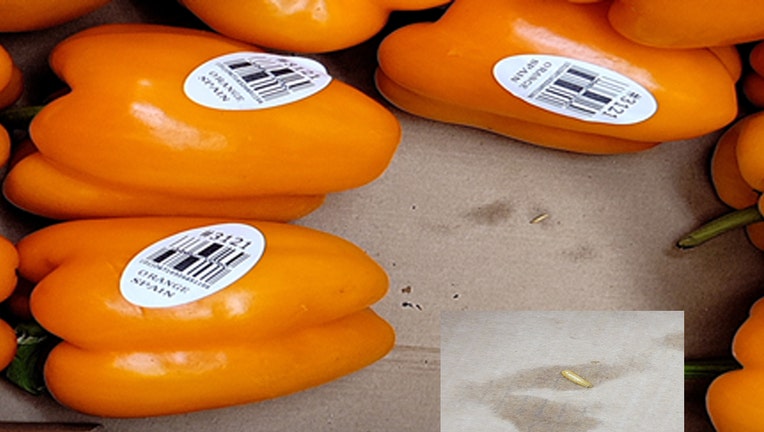 Photos from the U.S. Customs and Border Protection show the peppers and a closer shot of a Med Fly. (UBP)

NEW YORK - Peppers imported from Spain were found to have been infested with Mediterranean fruit flies.

Agents had seen signs of damage on the peppers. A closer look utilizing magnifying glasses revealed larva feeding inside the pulp of the peppers. The larvae were submitted to USDA Plant Inspection Station for pest ID. The pests were positively identified as Ceratitis capitata or Medfly.

The Med Fly is typically associated with citrus fruit but feeds on a variety of foods.

"We are very proud of our CBP Agriculture Specialists, who targeted, detected, intercepted, and thereby prevented the entry of this potential threat before it had a chance to harm our Agricultural and Economic vitality," said Francis J. Russo, Director, Field Operations, New York Field Office.

The Mediterranean Fruit Fly is considered the most important agricultural pest in the world. The Medfly has spread throughout the Mediterranean region, southern Europe, the Middle East, Western Australia, South and Central America, and Hawaii.

The first of numerous U.S. mainland infestations occurred in Florida in 1929. It has been recorded infesting a wide range of commercial and garden fruits, nuts and vegetables, including the apple, avocado, bell pepper, citrus, melon, peach, plum, and tomato.