WARNING: SOME VIEWERS MAY FIND THIS VIDEO GRAPHIC. The wrestler had just finished a match at the Xcel Energy Center when he collapsed on the mat. Medical staff revived the athlete and now he is recovering at a St. Paul hospital.

ST. PAUL, Minn. (FOX 9) - A 17-year-old from Becker, Minnesota was hospitalized after his heart stopped and he collapsed on the mat at the Minnesota State High School Wrestling Tournament Saturday.

It was a scary experience for his family, but he began to recover from his hospital bed in St. Paul Sunday. 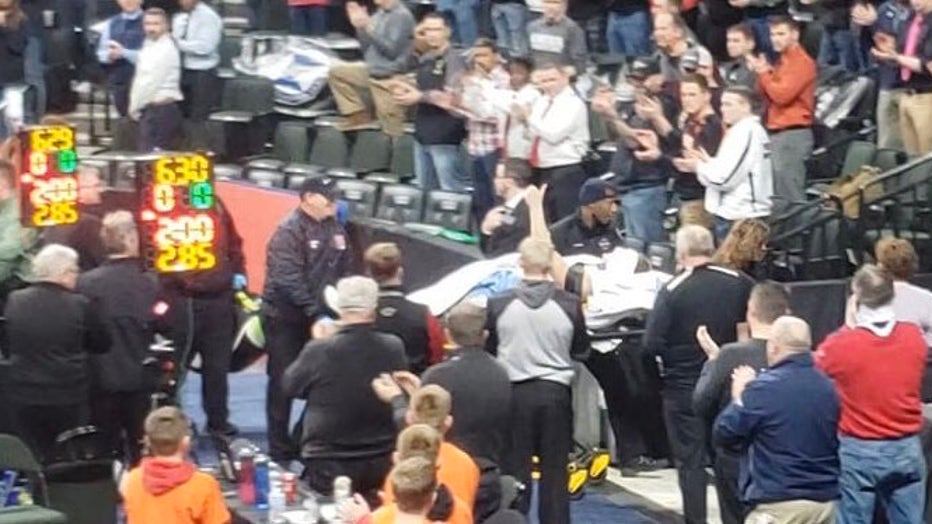 After a medical team revived a Becker, Minnesota high school wrestler, the athlete gave the crowd a thumbs up to let them know he was OK. (Rick Grammond)

Hundreds of wrestlers took over the Xcel Energy Center this weekend for the tournament. The talk Sunday was not about the champions, however. Everyone was talking about the wrestler who literally fought for his life on the mat.

“It was a total normal day,” said Becker High School Junior Brayden Weber. “I woke up, had breakfast, weighed in, warmed up totally fine, didn’t feel anything off.”

The 17-year-old had just finished his match Saturday when he collapsed next to the mat. Luckily, a medical team performed CPR and used an AED machine to revive him.

It was a normal match day for Weber, who was competing in the 220 class in the state tournament.

“We bonked heads in the first period and I kind of felt off after that and it was getting worse throughout the match and I was kind of starting to notice my body wasn’t corresponding with my mind,” he said.

In the third period, he started getting spotty and, after he was pinned, he blacked out.

“Apparently, I got up and shook hands, but I don’t remember any of it,” Weber said. “Then, I walked off the mat and collapsed right there.” 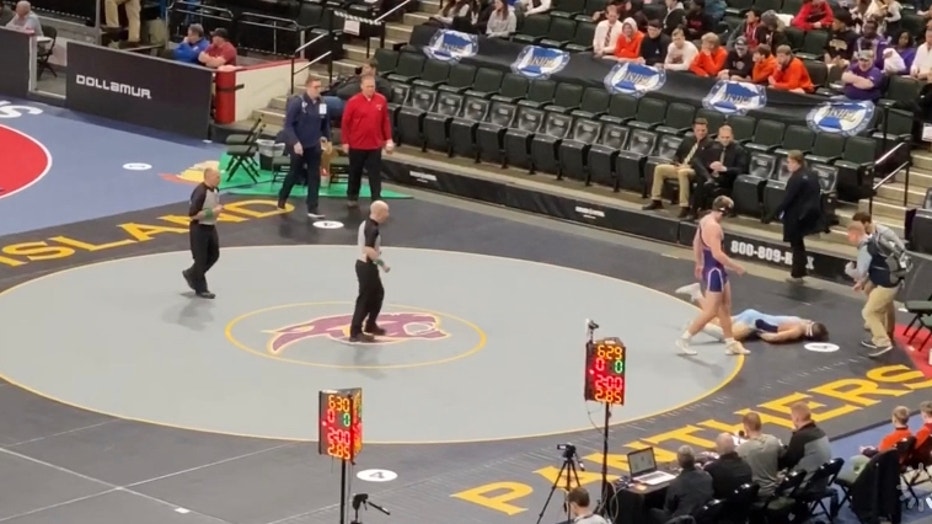 This wrestler from Becker, Minnesota collapsed on the mat at the state tournament Saturday.

“I knew at that point something wasn’t right,” said Sara Waytashedk, Weber’s mother.

Waytashedk was watching from the stands and ran to the mat to check on Weber.

“They had rolled him over and he was purple,” Waytashedk said. “His lips were a bluish-purple. His cheeks and his coloring were purple and he wasn’t breathing.”

“I was told I was pulseless for five minutes and I wasn’t breathing on my own at all,” Weber said.

The medical team on scene performed CPR and used an AED machine to get Weber’s heart pumping again.

“I remember hearing like the beeping of the AED machine and I thought it was my alarm clock because my eyes were closed,” Weber said.

Weber was conscious by the time he was being carried off the mat and gave a thumbs up before leaving the building to let everyone know he was OK.

“Like, I gotta let them know I’m OK now so I gave them the thumbs up,” he said. “I remember all of that.”

Weber took sixth place at the tournament. All of the wrestlers in his division signed a card for him and put it up on the podium to honor him while he recovers. He calls the support he’s received a brotherhood.

Sunday, Weber said he was feeling fine. Tests on his heart show no abnormalities. Doctors are doing more testing to figure out why this happened and prevent it from happening in the future.

Weber and his family say they are grateful for the team of medical professionals who thought quickly and saved Weber’s life.

“I just want to thank the people who were the first responders, the doctor, the first lady who came out and started doing compressions. I don’t know who you are, but thank you,” said Waytashek.

“It’s something that you never want to see happen to your child,” she added.