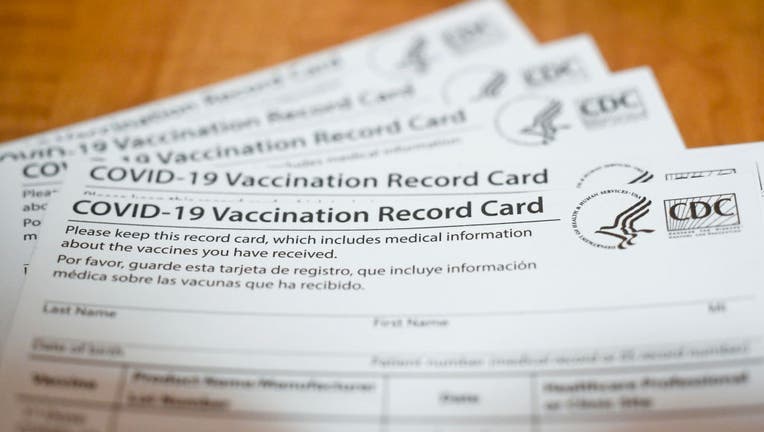 A COVID-19 Vaccination Record Card from the CDC (Centers for Disease Control and Prevention). (Photo by Ben Hasty/MediaNews Group/Reading Eagle via Getty Images)

CLEMENTS, Calif. - The owner of a Northern California bar was arrested on suspicion of selling fake COVID-19 vaccination cards to several undercover state agents for $20 each.

After receiving a tip, undercover agents with the California Department of Alcoholic Beverage Control went to Old Corner Saloon in the city of Clements several times in April and bought fake laminated vaccination cards, officials said.

They returned to the small-town bar this week and saw others buy the phony cards and arrested the bar's owner, supervising agent Luke Blehm told Sacramento news station KTXL-TV.

It wasn’t immediately known if the bar owner, Todd Anderson, has an attorney who can speak on his behalf. No one answered the phone at the bar Friday.

"He was in possession of a number of other unfilled-out COVID-19 vaccination cards, a laminating machine, laminate and several other cards that were finished. And it appears that they were waiting to be given to people," Blehm said.

Blehm said it appears it's the first such arrest in California.

"That we know of, this is the only case that’s ever been done — even nationwide possibly," he told the station.

Anderson was charged with three felonies, including identity theft, forging government documents and carrying an unregistered firearm. He also was charged with falsifying medical records, a misdemeanor.

Reasons to not laminate your vaccine card

Some health experts are warning against laminating the COVID vaccination card.

State officials also are investigating an employee of Anderson’s who may be connected to the cards.

Vaccination cards are being used as a pass for people to attend large gatherings. The European Union is considering allowing tourists who can prove they have been vaccinated.

In California, officials have allowed venue operators to offer easier access to those with proof of vaccination. That includes preferential access to large events like concerts and sporting events and allowing venues to create vaccinated-only sections where social distancing requirements are not as strict.