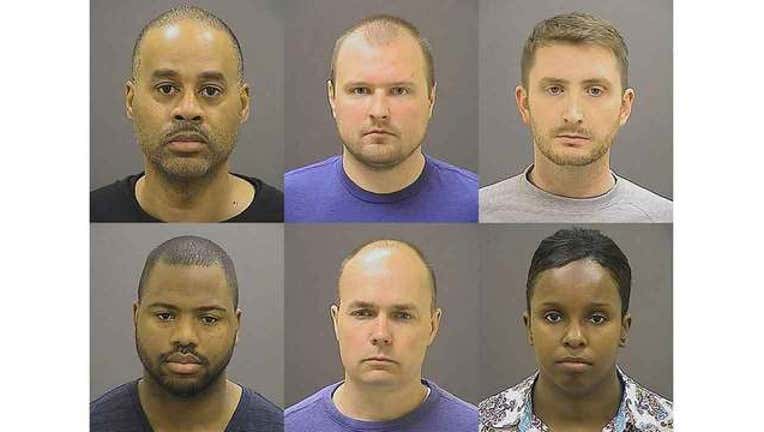 BALTIMORE (AP) — The city of Baltimore braced for a verdict as closing arguments were made Monday in the first of six trials of police officers charged in the death of Freddie Gray.

Mayor Stephanie Rawlings-Blake said business should continue as usual and that people must respect the jury's decision, but the city also opened an emergency operations center as a precaution so that authorities can coordinate any necessary response.

Prosecutors described Officer William Porter as indifferent to Gray's safety, repeatedly denying him medical care in the police wagon where his neck was broken after he was left handcuffed and shackled but unbuckled, making him vulnerable to being bounced around inside the metal compartment.

The wagon "became his casket on wheels" after Porter failed to belt him to the bench or call for a medic after he was injured, prosecutor Janice Bledsoe said Monday. Porter "just didn't care enough," she said.

Porter, who is charged with manslaughter, assault, misconduct in office and reckless endangerment, testified that he did nothing wrong to Gray, who was arrested after running from officers in his neighborhood.

The mayor said in a letter to community leaders that she has "no doubt" city officials are prepared for anything, and that the city also is communicating with outside law enforcement agency partners.

Demonstrations were initially peaceful following the young black man's death on April 19, a week after his arrest. But unrest broke out on the day of his funeral, bringing a curfew and the National Guard to the streets, and fueling the "Black Lives Matter" movement that has increased scrutiny of how minorities are treated by police.

Prosecutors said Porter is partly responsible because he ignored a departmental policy requiring officers to buckle prisoners in seat belts, and didn't call for an ambulance when Gray indicated he needed medical aid.

Porter, who lifted Gray off the van floor and sat him on the seat at one point during the trip to the police station, told jurors he didn't call a medic because Gray didn't show signs of injury, pain or distress and said only "yes" when Porter offered to take him to the hospital.

Porter and other witnesses testified that it was the responsibility of the wagon driver, Caesar Goodson, to buckle Gray into the seat belt. Goodson faces the most serious charge: second-degree "depraved-heart" murder.

Porter's fate may influence the trials of the other officers and set the tone for the city's healing.

With that in mind, Baltimore Police Commissioner Kevin Davis canceled leave for all officers through Friday, saying "the community has an expectation for us to be prepared for a variety of scenarios."

The mayor has urged residents to remain calm.