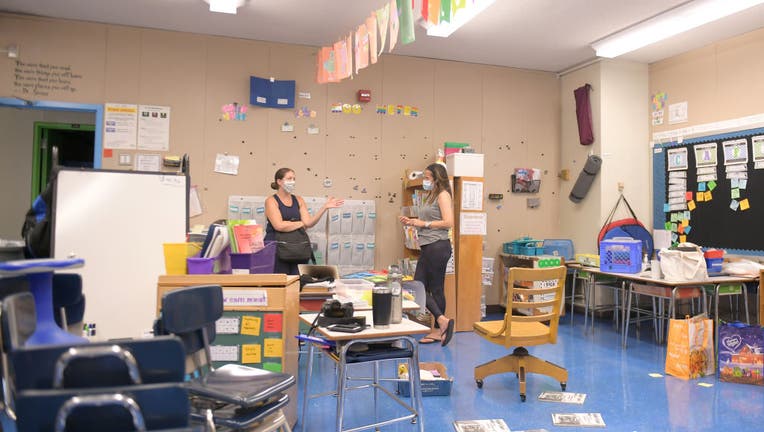 NEW YORK - Back to school for many of New York’s 2 ½ million public school students has meant back to their kitchen tables and bedrooms where they left off in the spring.

Students in most of the state’s largest urban districts — who haven’t set foot in a school for six months — will have to wait longer as they begin the semester remotely, while many of the state's rural and suburban districts stuck to the post-Labor Day tradition of bringing students back to buildings, if only part-time, this week.

New York City, by far New York’s largest district with more than 1 million students, is set to begin a blend of remote and live classes Sept. 21 after a long and complex battle, complete with the threat of a teachers’ strike, to resume school in the city hardest hit by the pandemic.

For districts statewide, the pandemic continues to color the return.

About 60 school districts on Long Island reopened on Tuesday. But not all students were there; many opted for remote learning.

There are hand sanitizer stations throughout buildings, one-way traffic patterns in the halls, staggered schedules and spread out desks, and class in unusual places like the gym, auditorium and outside to allow for social distancing.

Temperature checks are a regular practice. Classroom chatter is muffled by masks.

Even so, “We're all ready to get back in person. We miss each other,” said Shari Camhi, superintendent of the Baldwin Union Free School District, which asked students to commit to either all in-person or all remote. “I think human interaction is exceptionally important.”

High school sports, drama club and other extras will look different, if they take place at all. The New York State Public High School Athletic Association decided Wednesday to postpone fall seasons for football, volleyball and competitive cheer until March. Other sports are still scheduled to begin Sept. 21, but not everywhere.

The Cooperstown Central School District on Wednesday became the latest to cancel the entire fall athletics program and season.

“The district fully recognizes the tremendous disappointment this decision will cause our students,” Superintendent William Crankshaw wrote to parents, adding the move also will help make up for the pandemic-related loss of $1.2 million in state aid.

Wednesday marked the 33rd consecutive day that New York state’s infection rate was under 1%, Gov. Andrew Cuomo said. Some experts say a sustained decline in cases and a positive case rate of less than 2% are among the signs the virus is under control.

With the return to school, Cuomo said each of the state’s more than 700 school districts will be required to contribute to a new “COVID-19 Report Card,” an online dashboard the public can check to see whether students or staff at their school have tested positive.

But few, if any, public or private schools outside New York City will require virus testing as a condition of going to school. In New York, between 10% and 20% of students and staff in each building will be tested each month, with positive results triggering tracing and in some cases, a move to remote learning.

The testing program was added as part of last-minute agreement to keep teachers from striking.

The new year got off to a rocky start for some Buffalo Public Schools students who ran into technical problems that kept them from logging in for the first day of remote classes Tuesday. The district said students would not be marked absent, but the problem continued for some into Wednesday, even after parents were told to reboot computers to fix things.

State education officials said they have not compiled the number of districts statewide that are returning to in-person learning, remote classes or a combination of both.

Student Janae Lindsay returned Tuesday to Baldwin High School in Nassau County, but said she would have preferred a part-time schedule. "You have to wear your mask, and wearing that for five days, the whole time — I’d just rather do it two days and then be home and be more comfortable at my house," she said.

Chancellor Richard Carranza said 61% of New York City public school students have opted for blended learning and 39% will do all of their work remotely. Officials have said all schools will have a 30-day supply of personal protective equipment on hand but some teachers reporting for training this week said supplies at some schools were lacking and complained at least one state-owned Brooklyn campus hadn’t been cleaned.

Cuomo on Wednesday said the Sept. 21 school reopening in New York City was a factor in waiting until Sept. 30 to let restaurants resume in-person dining on a limited basis.

“Schools are reopening. That gives us all a great deal of concern,” Cuomo told reporters Wednesday.