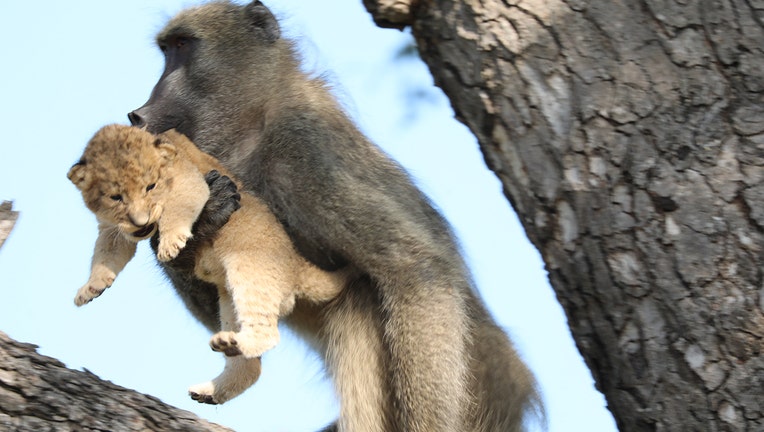 It’s like a real-life “Lion King,” although experts are concerned about the fate of this little "Simba."

Incredible photos show a male baboon carrying off a lion cub in South Africa’s Kruger National Park. After carrying the cub into the branches of a tree, the primate proceeds to groom the little lion.

The remarkable scene was witnessed by safari operator Kurt Schultz last weekend. He told The Associated Press that he has never seen anything like it in 20 years at the park.

“The baboon was grooming the lion cub as if it was a baby baboon,” he explained in an email to the AP. “Male baboons do a lot of grooming but the care given to this lion cub was the same care given by a female baboon to one of her own young." 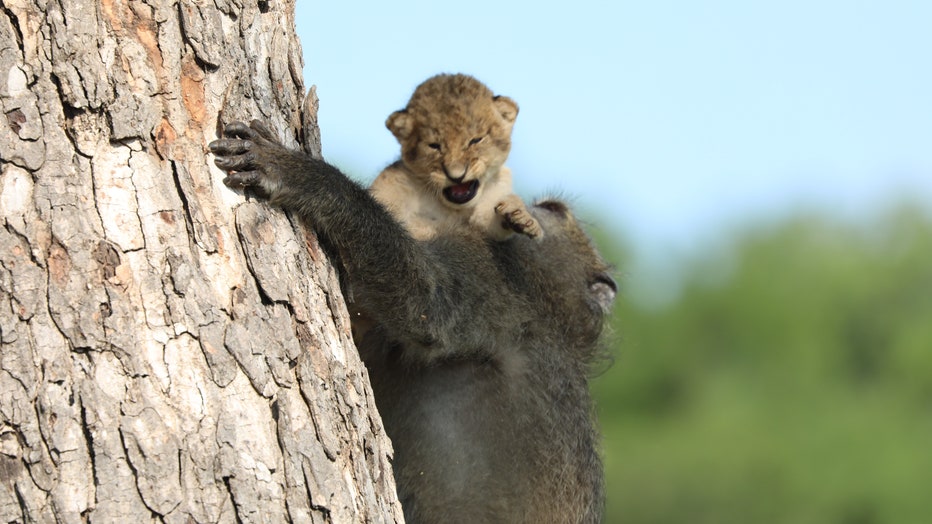 The guide said that he caught the scene early Saturday, after seeing a troop of baboons acting excited and animated. It is possible they had discovered the lion cub, he explained.

Schultz and others on safaris in the park watched the rare sight and took photographs.

Baboons "are really strong animals and when they were all excited and fighting over the baby in the beginning, it could have been injured internally,” Schultz noted. It was a hot morning and the cub was also showing signs of dehydration, he said. 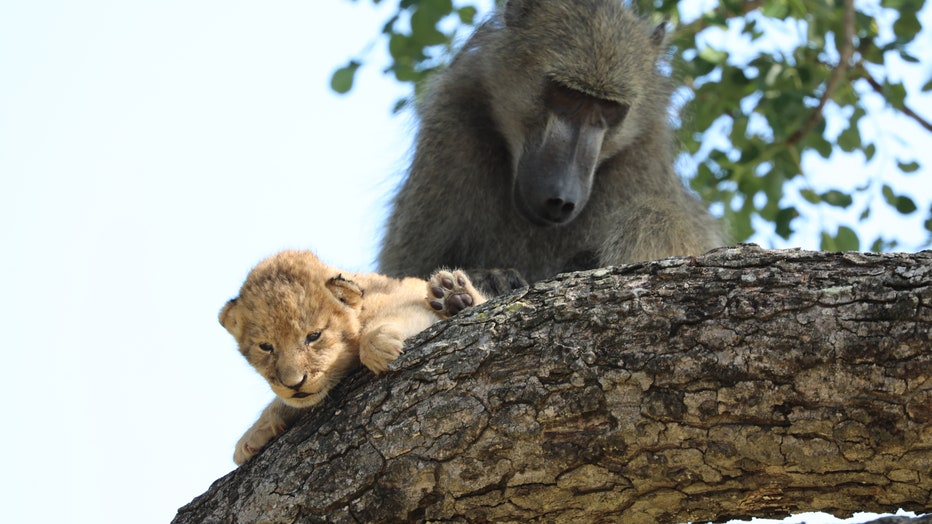 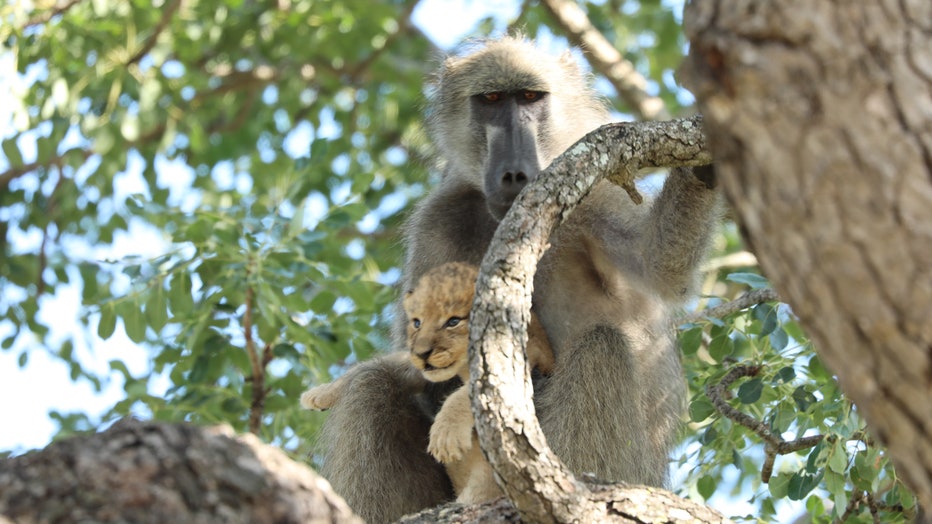 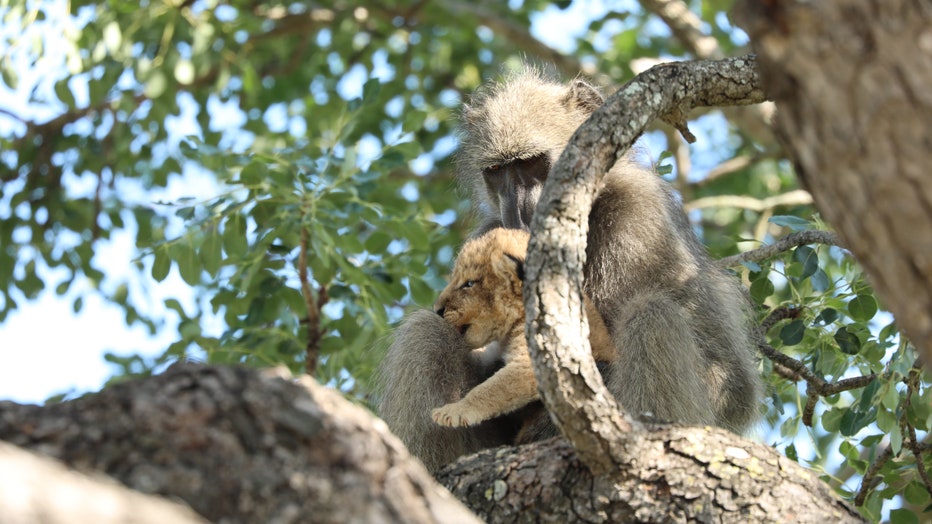 While the rest of the baboon troop settled down, the male “moved from branch to branch, grooming and carrying the cub for a long period of time,” Schultz said. “The cub seemed very exhausted.”

Sadly, it seems that the cub’s chances of survival are slim. In a Facebook post on Tuesday, Schultz’s Kurt Safari company explained that its guides and other operators have been looking for the cub. “Unfortunately there is no news,” it explained. “Although baboons have been seen in the same area, they did not have a lion cub with them.” 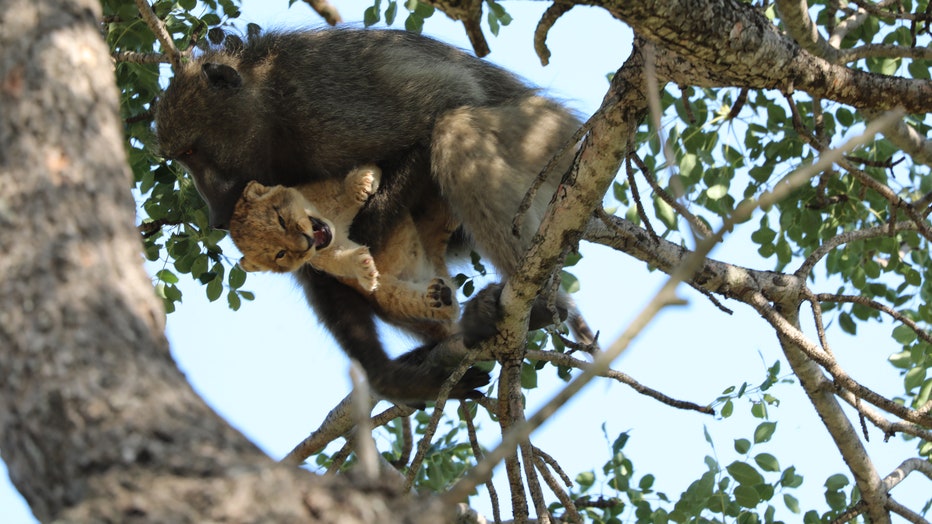 “No lion cub of this young age could survive without milk for this period of time,” Kurt Safari added in the post. “Nature is sometimes cruel and we as guides and Park rangers would not intervene, as nature needs to take its course, regardless of the outcome or how we as nature lovers might feel.”

In an earlier post, Kurt Safari explained that baboons have previously been seen killing leopard cubs, so it’s likely that that the lion cub would not have survived even a day with the baboons. This, it said, could be “either due to other baboons fighting for the cub or just the strength of the baboon moving around with the cub or the heat of the day.”

A survey conducted in 2005 and 2006 reported that Kruger National Park was home to an estimated 1,600 lions, according to its website.