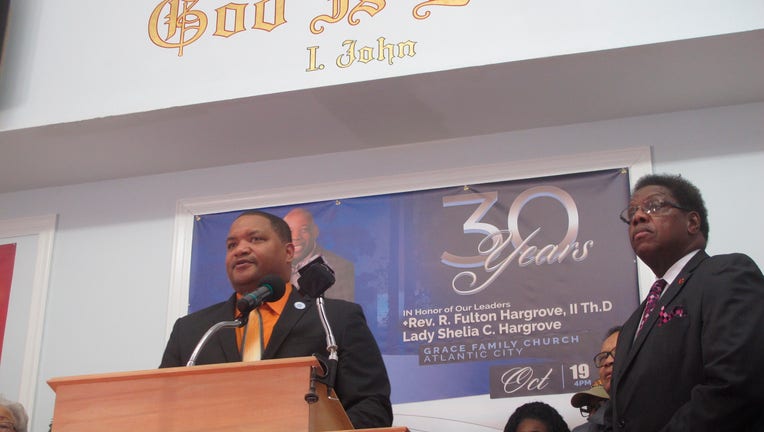 Mayor Marty Small, left, speaks at a church in Atlantic City N.J. on Jan. 15, 2020 as City Councilman Kaleem Shabazz listens. The mayor called a press conference to rally opposition to a proposed change of government that would eliminate an elected m

ATLANTIC CITY, N.J. (AP) — Atlantic City voters will decide whether to change the city's form of government to eliminate an elected mayor now that the city admits proponents of the move have enough valid petition signatures to force a special election on the question.

Mayor Marty Small said Wednesday the election has been scheduled for March 31. The move came a week after the city ruled organizers did not collect enough valid signatures. The reversal came after the city dropped its claim that a notary handling some of the petitions had not been certified at the time to do the job.

But at a news conference with clergy, political and community leaders at a church, Small vowed to rally opposition to the proposed change, calling it an unabashed power grab by the same interests who tried — and failed — to approve casinos in northern New Jersey.

He and others also said the proposed change, under which a mayor would be replaced by an appointed city manager, and neighborhood representation by geographic wards would be replaced by a smaller council elected in a citywide vote, would disenfranchise the city, whose political leaders are predominantly minority.

“We call this the billionaire north Jersey takeover, because that's what it is,” said Small, who is running for reelection this year. His immediate predecessor, Frank Gilliam, is due to be sentenced next month for stealing $87,000 from a youth basketball program he founded. “These are the people that are no good for Atlantic City, the same people that wanted casinos in north Jersey.”

A group calling itself Atlantic City Residents for Good Government gathered what it thought were more than enough signatures to force a special election. The effort is led by Bob McDevitt, president of Local 54 of the Unite here casino workers union; Morris Bailey, owner of Resorts Casino, and former state Senator Ray Lesniak, who spearheaded New Jersey's successful drive to legalize sports betting.

Of the three main leaders of the government change drive, only Lesniak, who is from Elizabeth, supported expanding casinos outside Atlantic City. Resorts' president, Mark Giannantonio, was part of a coalition that successfully campaigned against north Jersey casinos. And McDevitt spoke out repeatedly against the expansion proposal. The 2016 statewide referendum was rejected by nearly 80% of voters.

After the mayor's news conference Wednesday, McDevitt called Small “a pathological liar” and Lesniak said Small “will say anything. That's why he has to go.”

Bailey did not respond to a message seeking comment.

The group says it is seeking the change in government because Atlantic City has shown itself incapable of governing its own affairs competently. More than four years ago, the state seized most major decision-making power in Atlantic City, and has yet to let go.

On the church's altar, numerous residents, clergy and elected officials portrayed the government change proposal as a ploy to further disenfranchise the city's residents. Many voiced renewed fears that outside forces, once in power, would sell off Atlantic City's water works, possibly leading to the type of contamination crisis that plagued Flint, Michigan, and other cities. Lesniak said those concerns are unfounded.

“We see it as a hostile takeover,” said Bishop R. Fulton Hargrove II, at whose church the press conference was held. “The leadership of our community is black and brown.”

“We have a change of government every two years,” he said. “If you don't like the person in the job, vote them out and get rid of them. Control your own city."