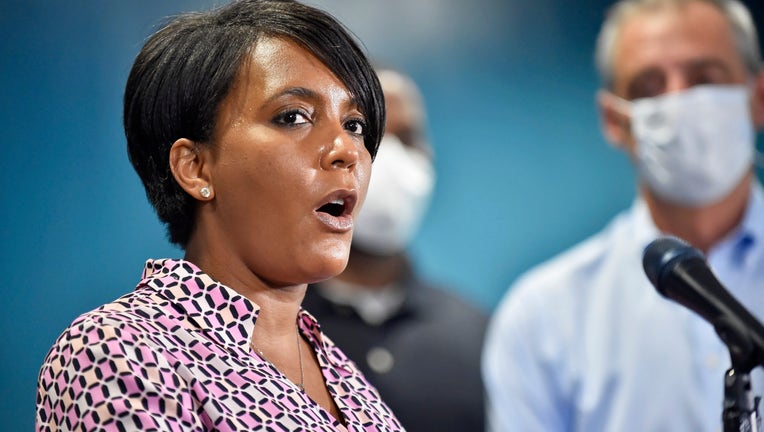 ATLANTA (AP) — The number of COVID-19 patients in Georgia hospitals rose to nearly 2,000 on Monday, as the number of confirmed cases statewide approached 100,000 people, including Atlanta Mayor Keisha Lance Bottoms. Officials have said many more people who are infected aren't being tested.

The increase in hospitalization continued even though the number of new test results predictably slackened over the Fourth of July holiday weekend. Local and state officials say they expect a crush of new people getting tested this week, though.

Although the number of people sick enough with coronavirus to require hospitalization has been in record territory for nearly a week, there hasn't been a corresponding wave of new deaths so far. The number of fatalities from the respiratory illness rose to at least 2,878 Monday in Georgia, but the typical number of new deaths reported in the state fell throughout the last half of June.

Georgia's hospitals have shown signs of strain, though. On Monday, 78% of critical care beds statewide were in use, matching the largest share filled with patients since officials began releasing statistics in mid-April. However, not all of those beds are filled with COVID-19 patients.

Bottoms, who has at times clashed with Republican Gov. Brian Kemp while seeking a more restrictive approach to the pandemic, announced her confirmed infection on Twitter on Monday. Her national profile has risen, with former Vice President Joe Biden looking at her as a possible vice presidential running mate on his Democratic presidential ticket.

“COVID-19 has literally hit home,” Bottoms tweeted. “I have had NO symptoms and have tested positive.”

Kemp, after flying around the state last week to encourage people to voluntarily wear a mask, announced a new voluntary program called the Georgia Safety Promise. The Republican governor says businesses can pledge that they are committed to hand washing, social distancing, mask wearing and surface cleaning. In exchange, state government will provide businesses with “a full digital toolkit of resources to share your commitment” including signs and social media posts.

"As we continue to fight COVID-19, we want to ensure Georgia businesses and the public are abiding by public health guidance in order to keep Georgia healthy and open for business,” Kemp said in a statement.

Kemp, though, has said he won't order masks to be worn statewide. The city of Savannah has ordered all people inside businesses to wear masks, even though the move appears to overstep Kemp's earlier orders that cities and counties can't make rules that go beyond state rules. Athens-Clarke County, Kemp's hometown, is expected to consider a mandatory mask order Tuesday.

Kemp's office said Monday that the governor is scheduled to have phone calls with city and county leaders on Tuesday to discuss the pandemic.

Harry Heiman, a public health professor at Georgia State University, said evidence so far is “unequivocal” in refuting that voluntary measures will be enough, saying that Kemp and Public Health Commissioner Kathleen Toomey have failed, leaving Georgia “in a worse place” than when Kemp acceded to public pressure and issued a stay-at-home order in early April.

“The idea that kind of pleading and coaxing people to put on masks is going to get you to where you need to be is nonsensical,” Heiman said Monday. He said Georgia's experience points to why governments have sweeping powers that can curtail normal liberties during disease outbreaks.

“These are exactly the times when we have to leverage policies that are effective," Heiman said.