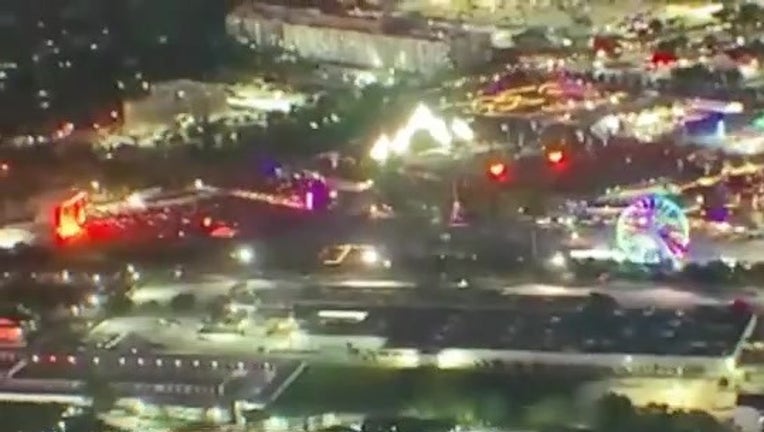 HOUSTON - As the investigation into the tragedy of Astroworld 2021 continues by the Houston Police Department, the Event Operations Plan is shedding some new light on what should have been done during specific emergencies while the event was taking place.

However, what wasn’t mentioned, was the plan for if there was a crowd surge during the event.

Preliminary information from HFD Chief Sam Peña on Saturday was that there were about 50,000 people in attendance, and at around 9:15 p.m., the crowd began to "compress" over the stage, causing panic and people started falling out.

The 56-page document, which FOX 26 received on Monday evening, listed what to do in situations including severe weather, high winds, an active shooter, riots/civil disturbances, and other situational issues that may affect life and property.

The document also listed what to do if there was a mass casualty incident declared and what should be done:

"Should the situation occur that on-site services become overwhelmed and adequate/appropriate patient care becomes jeopardized, the EMS Director will notify Event Control and advise activation of the MCI Plan.

● Incident Command will be established and will notify the local jurisdiction to advise of the nature and scope of the incident, the approximate number of casualties, best access into the area, possible staging area for incoming ambulances, and any possible hazards, including if decontamination of patients may be needed.

● Incident Command will establish communications and triage stations, which will be located according to the local jurisdiction MCI protocol.

● The unified command will notify all applicable hospitals of the need to prepare for incoming patients.

● On-site EMS personnel utilizing the START (Simple Triage and Rapid Treatment) system will initiate triage. Attempts will be made to keep the triage area geographically confined in order to remain efficient. Patients will be prioritized after three parameters have been evaluated: level of consciousness, respiratory status and perfusion status. If a deficit is found, the patient will be deemed "High Priority" requiring immediate transport. If all three conditions are within normal limits, the patient is "Low Priority" and is ok to have delayed transport. Patients who have obvious fatal injuries will be considered dead and will be assigned no transport status.

● Transport officers will report to the ambulance staging area and assign patients to incoming vehicles."

The report also included pre-written scripts that would be read if there was an order to evacuate or have concert-goers move to a different area while officials were addressing an incident.

Multiple lawsuits have been filed following the concert.

FOX 26 will continue to bring you the very latest on everything regarding the Astroworld Festival.