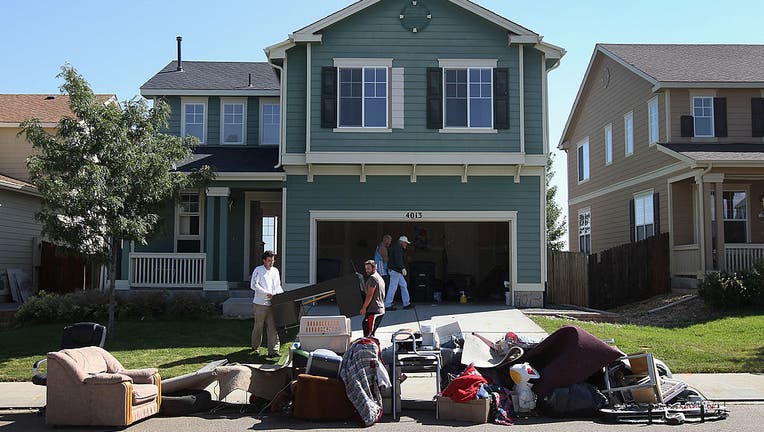 LONGMONT, CO - SEPTEMBER 21: An eviction team removes furniture during a home foreclosure on September 21, 2011 in Longmont, Colorado. The family had already moved out of the four-bedroom house, leaving some furniture to be removed to the street afte

He knocked on doors in the majority Hispanic community of South Tucson, told residents to gather personal effects, clothing, medications and pets, and watched as some families became homeless.

Ferguson says he strongly opposed the evictions, with the Arizona court system still requiring him to toss people out of their homes even as the nation was going into a deeper state of lockdown and panic over the coronavirus.

“To serve the best interests of the entire community, while we’re all facing a public health epidemic, we should allow people to stay in their homes, so that we don’t stress our shelters, our hospitals and our first responders,” Ferguson said.

Then on Wednesday, President Donald Trump announced a proposed $1.5 trillion package that he said includes “immediate relief to renters and homeowners" by suspending evictions and foreclosures for 60 days.

But, it turns out, the vast majority of renters will not be covered by the protections.

That's because the Department of Housing and Urban Development’s plan only covers single-family homes with loans through the Federal Housing Administration. That applies to roughly 8 million homeowners, most of whom are not under foreclosure, according to HUD.

Renters tend to have lower incomes than their homeowner counterparts and cannot tap into the equity in their homes for a credit line it in case of an emergency. And a disproportionate number of renters are African American, Hispanic and other minorities.

While housing advocates praised the Trump administration package as an “important first step," they said by excluding this economically vulnerable population, it does not go nearly far enough.

Susanna Blankley, coordinator of the Right to Counsel NYC Coalition, said she’s concerned for renters and others who won’t be covered by Trump’s moratorium.

“It will help a lot of people but ... it’s a very limited subset,” Blankley said. “It’s not nearly enough.”

Housing advocates say the situation in the United States reveals a bigger crisis with affordable housing that goes beyond the current virus emergency. And they have grave fears about what happens next, when tenants and homeowners face back payments and are still broke from being jobless.

Officials in more than three dozen cities and states, including San Francisco, Los Angeles and New York state, have put in place their own policies to halt evictions, foreclosures and utility shutoffs out of concern that the economic fallout from massive job losses will push many people to the brink of homelessness, at a time when they need to stay in their houses and apartments.

The measures vary in scope, and have included a monthslong reprieve for renters and homeowners who can show that their inability to pay is related to the coronavirus upheaval.

But the majority of states and localities have yet to step in to stop people from losing their homes.

“At this point, with so much uncertainty for so many people who have not thought of themselves at risk of homelessness, to have any type of relief is helpful,” said Jeff Smythe, chief executive director of Hope Atlanta, a homelessness prevention organization in Georgia. The state had an eviction rate of 4.7% in 2016, more than double the U.S. average, according to data analysis by the Eviction Lab.

“Behind all of this is the bigger crisis,” Smythe said. “Not having enough affordable housing, not having livable wages and the disparities around income are still with us.”

Atlanta Mayor Keisha Lance Bottoms signed an order on Tuesday meant to stop nonpayment evictions by the Atlanta metropolitan area’s public housing authorities for 60 days. The moratorium is a “key component of our collective community efforts to prevent further exposure and spread of this virus,” Bottoms said in a statement.

And in Chicago on Thursday, Cook County Sheriff Tom Dart announced that he was delaying enforcement of all eviction orders until April 30. During a televised address, Chicago Mayor Lori Lightfoot asked property owners to "show grace" with tenants. "No one needs the added stress of evictions, certainly not now," she said.

In Detroit, which has one of the nation’s largest African American majorities and has been particularly hard hit by foreclosures since the 2008 height of the mortgage crisis, homeowners will need relief beyond what’s being offered in the midst of the coronavirus pandemic, said Nicole Small, vice chair of the city's Charter Commission.

“Foreclosures are stripping away the culture and fabric of the city of Detroit,” Small said. “Home ownership is something that’s really important, especially to the black community, and now you have a lot of people who have owned homes for decades and they're actually becoming renters because they don't have any other options."

“The practices and the policies are so aggressive in order to displace people but the remedies and relief, they are so few and far between," Small said.

Housing advocates also said they were concerned with how at-risk individuals would prove that they qualify for the relief being offered by local governments.

“Folks who are performers or play music, who pick up bar-tending shifts here and there, who do various kinds of gig work are not going to show loss of income because there isn’t a steady stream to begin with,” said Deepa Varma, executive director of the San Francisco Tenants Union, a housing advocacy group.

“We don’t see how folks are going to catch up when they’re already barely making rent as it is,” Varma said.

There are growing calls for a national “rent holiday” long enough to help those who have lost jobs regain or find a solid financial foundation.

“People shouldn’t have to ask, ‘Do I use my last few dollars to get a bag of rice and beans, or do I hold onto that money to pay my rent?'” said Shapiro, of the Metropolitan Council on Housing in New York. “We shouldn’t just bail out the airlines and the banks.”

“For the most part, if you're black and brown, you're getting it a lot harder with the systemic racism and xenophobia," Woods said. "Now, we have a pandemic where people are scared to go to the doctor, let alone miss work, because they still have to pay their rent.”

Aaron Morrison and Kat Stafford are members of the AP’s Race and Ethnicity team. Morrison reported from New York and Stafford from Detroit. AP Business writer Ken Sweet in New York and AP writer Sophia Tareen in Chicago contributed to this report.