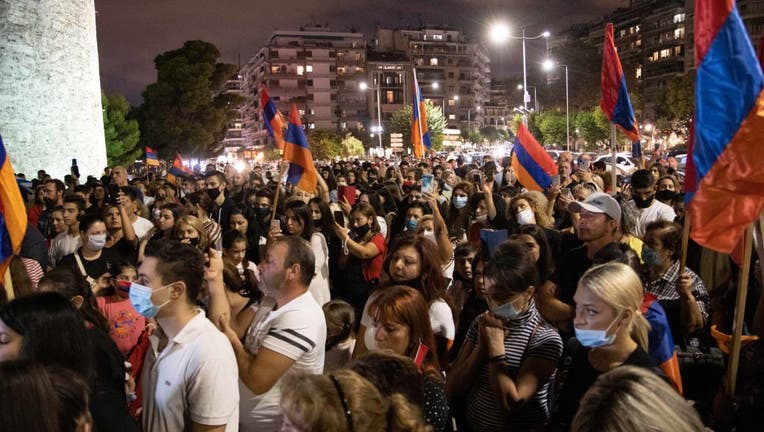 Armenian people with the support of the Committee of Armenians, the local community and Greeks demonstrate in front of the White Tower, the symbol of Thessaloniki city in Greece on 03 October 2020 in support of Artsakh and they protest against the wa

This was their second attempt to establish a ceasefire since heavy fighting broke out in Nagorno-Karabakh (also known as Artsakh) on Sept. 27.

The fighting and shelling has killed hundreds of people — both combatants and civilians — and marks the biggest escalation of a decades-old conflict over the region in more than a quarter-century.

The Defense Army of the Republic of Artsakh stated that Azerbaijani armed forces violated the agreed upon humanitarian truce at 7:20 a.m. local time after an active artillery fire launched an attack in the southern direction.

The Ministry of Foreign affairs for the Republic of Armenia released a statement saying “This is the second time that Azerbaijan violates the ceasefire agreement achieved through the personal mediation of the leader of the OSCE Minsk Group Co-Chair country thus demonstrating to the international community its treacherous nature, which we have been dealing with for decades. Armenia will continue to undertake all necessary measures to impose peace on Azerbaijan and establish a ceasefire regime which will entail precise and effective mechanisms for maintaining and verifying it on the ground.”

The fighting, involving heavy artillery, rockets and drones, has continued despite repeated calls for cessation of hostilities coming from around the globe. It also raises the specter of a wider conflict that could draw in Russia and Turkey and threaten Caspian Sea energy exports.

“The enemy launched an attack in the southern direction,” and there were “casualties and wounded on both sides,” Armenian Defense Ministry spokeswoman Shushan Stepanian said.

Azerbaijan’s Defense Ministry, in turn, maintained that Armenian forces used mortars and artillery in the conflict zone overnight. The ministry accused Armenia of using large-caliber weapons to attack the positions of the Azerbaijani army in two regions north of Nagorno-Karabakh along the border, a claim Armenian military officials denied.

RELATED: Continuing coverage of the conflict between Armenia and Azerbaijan

In a statement, Armenia said the Azerbaijani government in Baku “categorically rejected” an attempt to reach an agreement on withdrawing wounded soldiers from the battlefield through mediation by the International Committee of the Red Cross.

Azerbaijani authorities said they were prepared to hand over the bodies of some Armenian servicemen to Armenia through mediation by the ICRC and an agreed-upon border corridor “in the direction of the Tovuz region.” Officials didn’t clarify how many bodies that entailed.