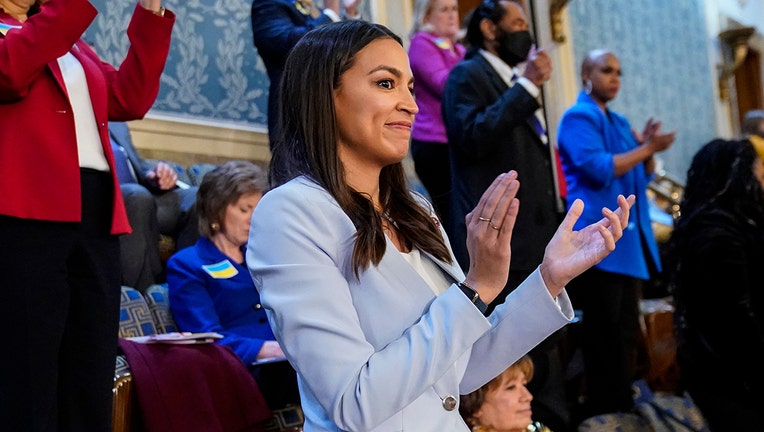 Rep. Alexandria Ocasio-Cortez, D-N.Y., applauds as President Joe Biden speaks during a State of the Union address at the U.S. Capitol in Washington, D.C., U.S., on Tuesday, March 1, 2022. (The Washington Post/Bloomberg via Getty Images

Biden's first State of the Union, which lasted just over one hour, touted his administration's and European allies' crackdown against Russia. He said he did not support defunding the police, and celebrated what he believed were his economic successes.

Ocasio-Cortez went on MSNBC Tuesday evening and criticized Biden for "gloss[ing] over" issues such as the "crisis in education," student loan debt and immigration.

"I do think that there are some things that were left unsaid in which we’re really going to have to work on as a party," she said.

During the president's speech, Ocasio-Cortez said, "constituencies who have historically supported the president … perhaps haven't heard their issues spoken to in ways they wanted to hear it."

Biden said during his State of the Union address, "We need to secure our border and fix the immigration system, and if you might guess, I think we can do both." He raised technology his administration was bringing to the border, such as scanners, and stressed the importance of providing a "pathway for Dreamers."

"I think that there are some things left a little to be desired from key constituents in the Democratic base, but the president's goal was very clear," Ocasio-Cortez said. "He was laser-focused on really projecting a theme of unity, and I think he stuck to that."

Ocasio-Cortez represents parts of Queens and the Bronx.

State of the Union: Full text of Biden's 2022 address

You can read the full text of President Joe Biden's 2022 State of the Union here.

He will check Russian aggression in Ukraine, tame soaring U.S. inflation, and deal with the fading but still dangerous coronavirus, President Joe Biden vowed in his first State of the Union address.