Anne Rice, the novelist whose lush, best-selling gothic tales, including "Interview With a Vampire," reinvented the blood-drinking immortals as tragic antiheroes, has died. She was 80.

Rice died late Saturday due to complications from a stroke, her son Christopher Rice announced on her Facebook page and his Twitter page.

"As a writer, she taught me to defy genre boundaries and surrender to my obsessive passions," Christopher Rice, also an author, wrote. "In her final hours, I sat beside her hospital bed in awe of her accomplishments and her courage."

Rice's 1976 novel "Interview With the Vampire" was later adapted, with a script by Rice, into the 1994 movie directed by Neil Jordan and starring Tom Cruise and Brad Pitt. It's also set to be adapted again in an upcoming TV series on AMC and AMC+ set to premiere next year. 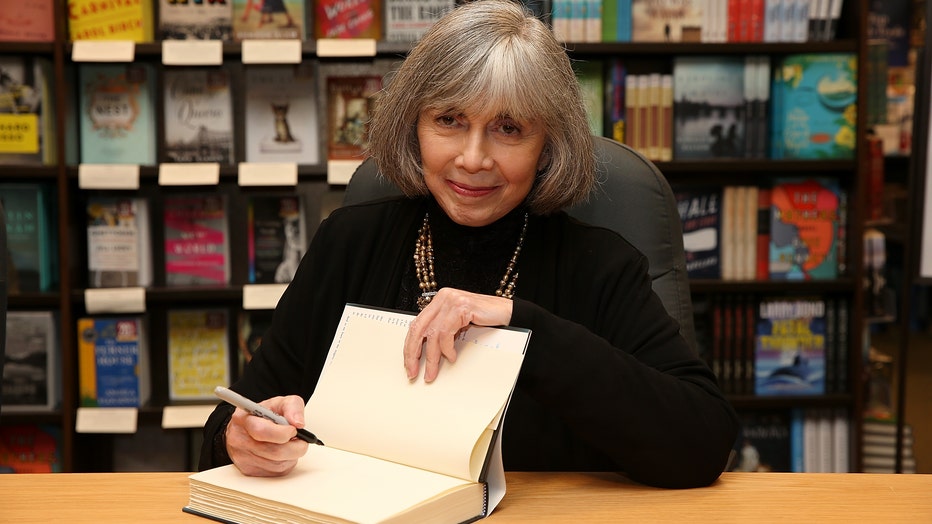 HUNTINGTON BEACH, CA - DECEMBER 06: Anne Rice attends the book signing and in conversation with Christopher Rice for "Prince Lestat and The Realms of Atlantis" at Barnes & Noble on December 6, 2016 in Huntington Beach, California. (Photo by Phill

"Interview With the Vampire," in which reporter Daniel Molloy interviews Louis de Pointe du Lac, was Rice's first novel but over the next five decades, she would write more than 30 books and sell more than 150 million copies worldwide. Thirteen of those were part of the "Vampire Chronicles" begun with her 1976 debut. Long before "Twilight" or "True Blood," Rice introduced sumptuous romance, female sexuality and queerness — many took "Interview With the Vampire" as an allegory for homosexuality — to the supernatural genre.

"I wrote novels about people who are shut out life for various reasons," Rice wrote in her 2008 memoir "Called Out of Darkness: A Spiritual Confession." "This became a great theme of my novels — how one suffers as an outcast, how one is shut out of various levels of meaning and, ultimately, out of human life itself."

Born Howard Allen Frances O’Brien in 1941, she was raised in New Orleans, where many of her novels were set. Her father worked for the postal service but made sculptures and wrote fiction on the side. Her older sister, Alice Borchardt, also wrote fantasy and horror fiction. Rice's mother died when Rice was 15.

"I believed for a long time that the differences, the quarrels among Christians didn’t matter a lot for the individual, that you live your life and stay out of it. But then I began to realize that it wasn’t an easy thing to do," Rice told The Associated Press then. "I came to the conclusion that if I didn’t make this declaration, I was going to lose my mind."

Rice married the poet Stan Rice, who died in 2002, in 1961. They lived amid the bohemian scene of Haight-Ashbury in 1960s San Francisco where Rice described herself as "a square," typing away and studying writing at San Francisco State University while everyone else partied. Together they had two children: Christopher and Michelle, who died of leukemia at 5 in 1972.

It was while grieving Michelle's death that Rice wrote "Interview With the Vampire," turning one of her short stories into a book. Rice traced her fascination with vampires back to the 1934 film, "Dracula's Daughter," which she saw as a young girl.

"I never forgot that film," Rice told the Daily Beast in 2016. "That was always my impression of what vampires were: earthlings with heightened sensibility and a doomed appreciation of life."

In Rice's "Vampire Chronicles," some critics saw only cheap eroticism. But others — including millions of readers — saw the most consequential interpretation of vampires since Bram Stoker.

"Let me suggest one reason why the books found a mass audience. They were written by someone whose auditory and visual experiences shaped the prose," Rice wrote in her memoir. "I am a terrible reader. But my mind is filled with these auditory and visual lessons and, powered by them, I can write about five times faster than I can read."

Rice's longtime editor, Victoria Wilson, recalled her as "a fierce storyteller who wrote large, lived quietly, and imagined worlds on a grand scale."

"She summoned the feelings of an age long before we knew what they were," Wilson said in a statement. "As a writer, she was decades ahead of her time."

Rice will be interred during a private ceremony at a family mausoleum in New Orleans, her family said. A public celebration will also be planned for next year in New Orleans. "Ramses the Damned: The Reign of Osiris," a novel Rice wrote with her son Christopher, will be published in February.