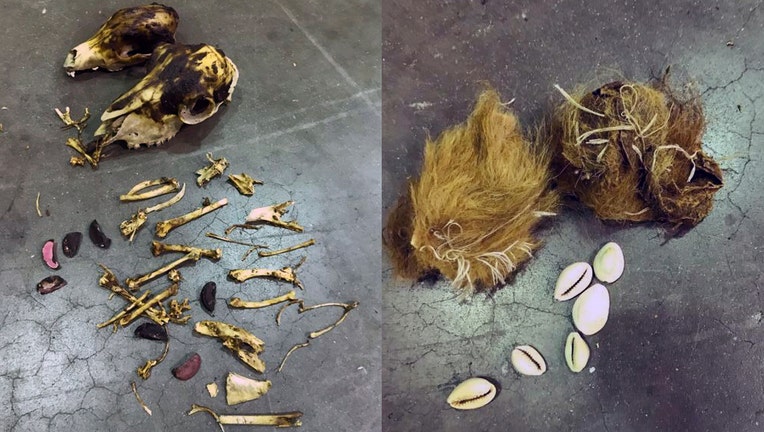 HOUSTON - A shipment coming from Africa that was listed as containing "clothing" actually had animal skulls, bones, and skins; sea snail shells; a black paste; and agricultural items, according to U.S. Customs and Border Protection officials at an airport in Texas.

Agriculture specialists examined the shipment, which came from Nigeria, at a cargo facility at George Bush Intercontinental Airport in Houston. Inside the shipment, they found a dog's skull, a sheep's skull, various other bones, skins from an unknown mammal, cowrie shells, tubs of a black paste that could be soap made from animal ingredients, 72 pounds of fresh wood chips, 33 pounds of melon seeds, four other types of seeds for planting, and a melon, authorities said.

"This interception is indicative of our commitment to protecting the nation's agriculture industry from the introduction of harmful exotic pests and foreign animal and plant diseases," CBP Port Director Shawn Polley said in a statement.

The U.S. Fish and Wildlife Service, which regulates animal products, confiscated the skulls, bones, skins, and shells. Customs and Border Protection destroyed the other items, which are regulated by the U.S. Department of Agriculture.

"On a typical day in fiscal year 2019, CBP agriculture specialists around the nation intercepted 314 pests, and prevented 4,695 restricted or prohibited plant, meat, animal byproduct, and soil materials from entering the country," Customs and Border Protection said in a news release.

The United States bans the importation of certain animal and agricultural products because they can spread animal diseases and plant pests.