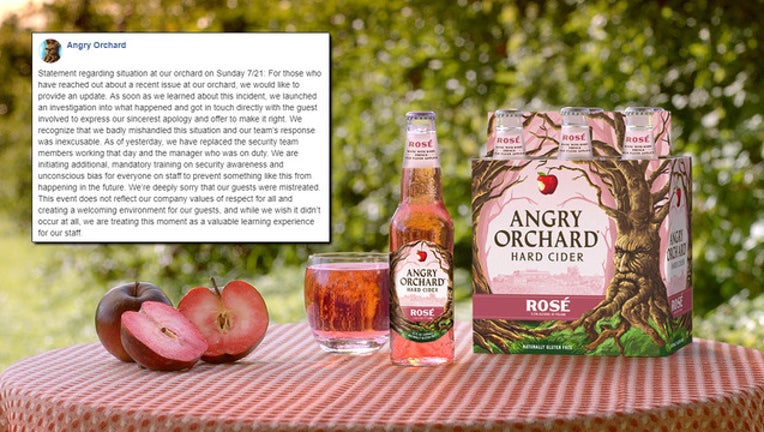 WALDEN, N.Y. (AP) - Angry Orchard has issued an apology and fired a manager at its cidery in the Hudson Valley following allegations of racial bias against black patrons who were celebrating a marriage proposal.

Cathy-Marie Hamlet wrote on Facebook that white security employees at the Walden cider garden interrupted her fiancé as he was proposing to her Sunday, accusing him of stealing a T-shirt.

Hamlet said that security personnel approached her and her friends multiple times and made them empty their bags and pockets.

Hamlet said she was humiliated and left with her friends in tears.

In a statement, Angry Orchard said the situation was "badly mishandled" by employees. It announced staff training addressing "security awareness and unconscious bias."

"I emptied my entire bag in front of her, and since this was the SECOND time she had walked over, I said, 'I know you're just doing your job, but I can't help but wonder if this is because we're Black. We're the only Black people here at your establishment.' Of course, she said that that wasn't the case," Hamlet wrote on Facebook. "I'm sorry, and not to sound pretentious, but as a doctor, I have no reason to steal a $28 T-shirt when I could afford to buy ALL of the T-shirts in their gift shop."