What is the Stars and Stripes newspaper?

Stars and Stripes operates from inside the U.S. Department of Defense, but is editorially separate from it.

WASHINGTON - A bipartisan group of 15 U.S. senators are calling on the Pentagon to continue funding for the Stars and Stripes publication, an editorially independent military newspaper that began during the Civil War, which may be forced to stop publishing by the end of the month.

A letter dated Sept. 2 to Secretary of Defense Mark Esper states that the “historically significant” publication only represents a “tiny fraction” of the department’s annual budget, yet cutting it “would have a significantly negative impact on military families.”

Stars and Stripes receives $15.5 million in federal funding to print and distribute newspapers to troops around the world, which accounts for about half of the publication’s annual spending. The remainder of its funding comes from sales, subscriptions and advertising, the paper said.

The letter, signed by Sens. Dianne Feinstein, D-Calif., veteran Tammy Duckworth, D-Ill., Susan Collins, R-Maine, and more, calls the newspaper “an essential part of our nation’s freedom of the press that serves the very population charged with defending that freedom.”

"We understand that DoD plans to cease publication of Stars and Stripes on September 30, 2020 and completely dissolve the organization by January 31, 2021 as a result of the proposed termination of funding in the fiscal year 2021 President's budget," the letter states. "We urge you to take steps to preserve the funding of Congress before allowing any such disruption to take place."

The Defense Department ordered the paper to halt publication by Sept. 30, and dissolve the organization by the end of January. "The order, in a recent memo to Stripes, follows the Pentagon's move earlier this year to cut the $15.5 million in funding for the paper from the Defense Department budget. And it is a reflection of the Trump administration's broader animosity for the media and members of the press", according to the Associated Press.

However, President Donald Trump said Friday that he won't allow the Pentagon to cut funding for the military's independent newspaper, Stars and Stripes.

“The United States of America will NOT be cutting funding to @starsandstripes magazine under my watch,” Trump tweeted. “It will continue to be a wonderful source of information to our Great Military!”

Trump's tweet came as he fought off new accusations that he called service members killed in World War I “losers” and “suckers” during an event in France in 2018.

In February, the Pentagon released a $705.4 billion fiscal year 2021 budget that included a proposed cut to funding for Stars and Stripes. Esper told reporters that the money would be used for “higher-priority issues,” like purchasing modern weapons.

“We have essentially decided coming into the modern age that newspaper is probably not the best way we communicate any longer,” Elaine McCusker, the Pentagon’s acting comptroller, said at the time.

Stars and Stripes also operates online, with millions of readers between its digital platforms. 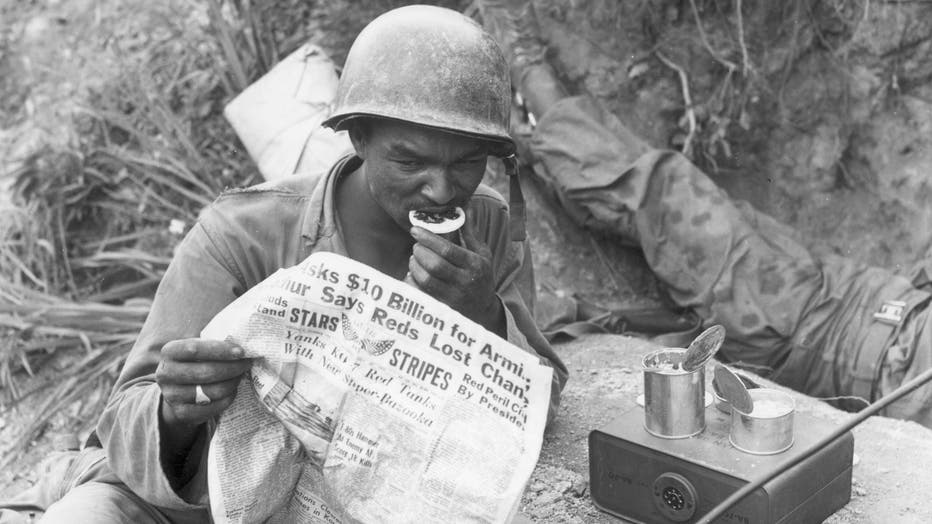 A file image from 1952 shows an American soldier reading the Stars and Stripes newspaper while eating in the field during a lull in the fighting during the Korean War. (Photo by Consolidated News Pictures/Getty Images)

The House of Representatives passed an appropriations act for the Defense Department, which contains additional funding to continue operating Stars and Stripes. But the lawmakers note in the letter that the Senate has not yet released its defense appropriations bill, nor has it had an opportunity to conference with the House, “leaving it as a real possibility that Congress may not agree with the proposal to eliminate this funding.”

“Stars and Stripes is an essential part of our nation’s freedom of the press that serves the very population charged with defending that freedom. Therefore, we respectfully request that you rescind your decision to discontinue support for Stars and Stripes and that you reinstate the funding necessary for it to continue operations,” the letter reads.

The senators also wrote that the under a continuing resolution, the Pentagon has “a legal obligation... to not act on a termination of a program until a full-year appropriations bill is enacted.”

The Pentagon did not immediately return a request for comment.

Stars and Stripes first appeared during the Civil War and has been continuously published since World War II.

The daily publication is printed at sites around the world, including Afghanistan, Germany, Japan, Qatar and South Korea, and is delivered to active-duty service members on the front lines, sometimes where internet is inaccessible.

Research indicates that a copy of Stars and Stripes distributed downrange may be read by as many as seven different people, according to the newspaper.

The Associated Press and Stephanie Weaver contributed to this article.