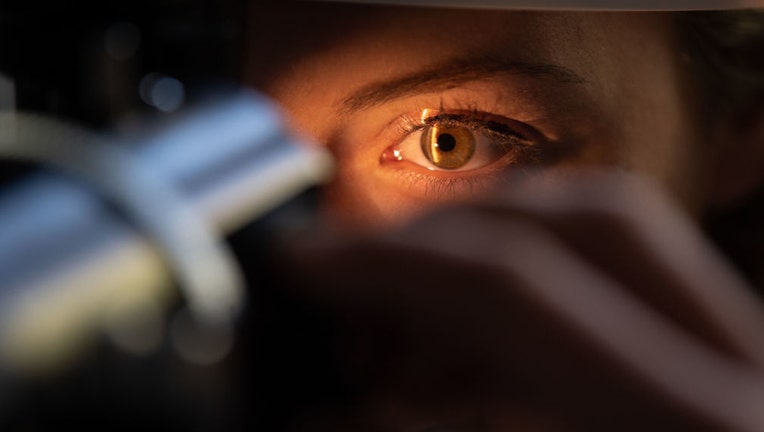 FILE - A doctor examines the eye of a patient.

Researchers believe algae could be the solution to fixing blindness after one patient who received an experimental treatment had his vision partially restored, according to a recent study.

"Optogenetics may enable mutation-independent, circuit-specific restoration of neuronal function in neurological diseases," according to the study, published in "Nature Medicine" this month.

For the study, doctors were treating a patient with retinitis pigmentosa, which impacts more than two million people worldwide, the study’s authors said.

Retinitis pigmentosa is a "neurodegenerative eye disease where loss of photoreceptors can lead to complete blindness," the study said.

Doctors used a combination of intraocular injections of an "adeno-associated viral vector encoding ChrimsonR with light stimulation via engineered goggles."

The patient, a 58-year-old male diagnosed with retinitis pigmentosa 40 years ago, was given a gene for a light-sensing algae protein with the help of special goggles which allowed him to perceive, locate, count and touch different objects, according to the study.

"Within a few months, the man reported he could see the white stripes at a pedestrian crossing while walking outside wearing the goggles," study co-leader José-Alain Sahel, a physician-scientist at the University of Pittsburgh School of Medicine and the Vision Institute in Paris, told Science Magazine.

The man was also able to pass several tests after being treated such as identifying and picking up different large objects like a notebook or a staple box. He was able to identify the difference between both objects with 100% accuracy without the help of the goggles, according to the study.

Other pioneering treatments for curing blindness are in the works, such as gene editing, while far more invasive, have shown promising results to cure inherited diseases.

Scientists say they have used CRISPR, a gene-editing tool, inside someone’s body for the first time which is a new frontier for efforts to operate on DNA.

"We literally have the potential to take people who are essentially blind and make them see," said Charles Albright, chief scientific officer at Editas Medicine, the Cambridge, Massachusetts-based company developing the treatment with Dublin-based Allergan. "We think it could open up a whole new set of medicines to go in and change your DNA."

Additionally, a gene therapy called Luxturna is being used to cure Leber congenital amaurosis where a modified virus is used to carry a replacement gene into cells in the retina in the back of the eye. It’s delivered as an injection during a brief surgery.

Leber congenital amaurosis is the most common cause of inherited childhood blindness, occurring in about two to three of every 100,000 births. People often see only bright light and blurry shapes and eventually can lose all sight.

About half of the people treated for Leber congenital amaurosis were able to read three or more additional lines on an eye chart, but the variability between the groups was too big to be sure, statistically, that they were different on this measure.
Many are no longer legally blind and gained independence.

"There were children who were able to move from a Braille classroom to a sighted classroom. One person who had never worked was able to get a job," said Dr. Katherine High, president of Spark Therapeutics and the scientist who pioneered the therapy when previously at the children’s hospital.