Family and friends of Yaseen Thomas Johnson expressed their remorse outside the Hennepin County courthouse Tuesday. FOX 9's Paul Blume has the latest on a shooting that was the result of a pair of sneaker sale, according to authorities.

PLYMOUTH, Minn. (FOX 9) - A 19-year-old man is accused of fatally shooting an Albertville teenager over a pair of Balenciaga sneakers, according to authorities.

Sirleaf is one of three suspects the Plymouth Police Department identified following Johnson's killing. An 18-year-old man who was arrested in connection to the case has been released from jail without being charged. And police are still searching for the third suspect, 19-year-old Hans Madave of New Hope. 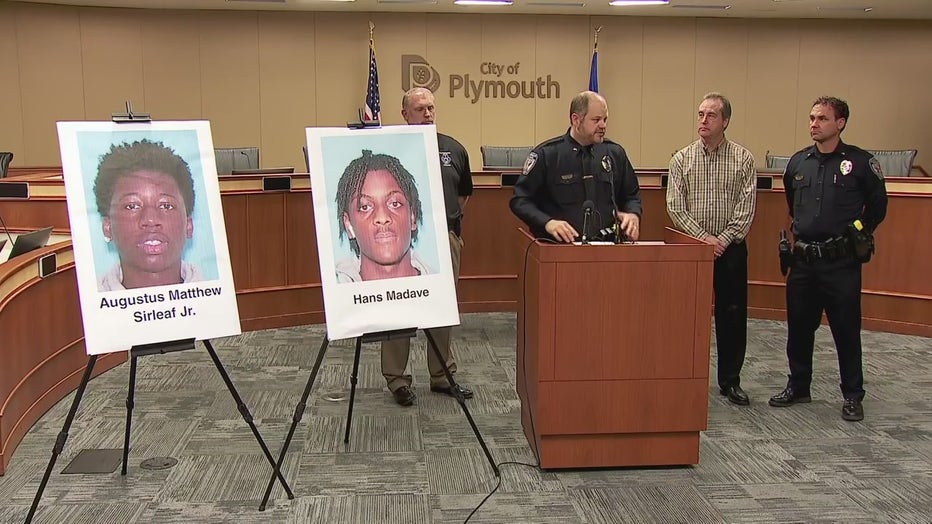 Plymouth Police identified two suspects and asked for the public's help locating them on Thursday. (FOX 9)

Sirleaf's bail is set at $1 million. His first court appearance is scheduled for 1:30 p.m. on Tuesday.

The charges against Sirleaf

According to the criminal complaint, police responded to a shooting at an apartment complex at 9730 37th Place in Plymouth at 5:56 p.m. on November 14 on a report of shots fired. Upon arrival, police found Johnson slumped over in the passenger seat of a vehicle parked near the dumpsters – both rear doors of the Buick Enclave were open, and there were bullet holes in the windshield.

Johnson was declared dead at the scene. The medical examiner said he was shot three times, including to his upper left chest and two shots to his head.

Right after police arrived at the scene, a man in a red hoodie was spotted. He told police he'd been in the driver's seat of the vehicle when Johnson was shot and he ran from the vehicle, charges allege.

The witness told police he and Johnson went to the parking lot to buy some shoes, charges said. When they got there, two men were standing by the garbage cans and then they got into the witness' vehicle. Johnson had a conversation about the shoes with one of the men, later identified as Sirleaf, in the backseat.

Sirleaf gave Johnson one of the shoes and Johnson gave Sirleaf half the money. After Johnson looked at one shoe, he decided he liked them and gave the other half of the money to Sirleaf. Sirleaf then told Johnson to give him the one shoe back, but Johnson said no. That's when Sirleaf pulled out a gun and pointed it at Johnson, the witness told police, according to court documents.

A 17-year-old Albertville teen was found dead from multiple gunshot wounds in a vehicle in Plymouth Monday evening, and now police are asking for the public's help in finding two suspects believed to have been involved.

The witness told police he saw Johnson flinch and then he heard ringing and when he looked over, he saw blood. Then he ran from the vehicle, charges said.

In the backpack found at the scene, police found receipts and day passes for the Plymouth Creek Center. The receipts were paid for using a credit card in the name of a man identified in the complaint as L.W., charges said.

Police reviewed surveillance video from the Talus Apartments, 3905 Lancaster Lane, in Plymouth – not far from the complex where the shooting occurred – and saw a vehicle parked along the curb. The video showed a man wearing dark clothing run down the hill on the south side of the property and get into the driver's side door of the parked vehicle, charges said. A short time later, another man, who appeared to be carrying a gun, ran from the west and got into the vehicle through the same door. The vehicle then drives off.

Police said the vehicle was registered to L.W.'s father. L.W. told police at about 5 p.m. on November 14 he was on a Facetime call with Sirleaf and the other suspect, Hans Madave, when Sirleaf told L.W. he was planning a "lick" (slang for robbery) and he needed Madave to help. Sirleaf told L.W. to pick Madave up and come to his apartment on Lancaster Lane North in Plymouth. When they arrived, Sirleaf and Madave planned the details of the robbery, charges allege.

According to the complaint, L.W. said he saw Sirleaf with a gun that he was hiding in his coat. He told police he drove Sirleaf and Madave to the parking lot where the shooting happened, and then L.W. drove back to the Talus Apartments, where he waited for Sirleaf and Madave as they'd planned. While he was waiting, Madave came back to the vehicle and told L.W. that Sirleaf fired his gun. Then Sirleaf returned to the vehicle and said, "Had no choice but to shoot."

L.W. said he then drove back to Sirleaf's apartment complex. Madave went in and opened the underground parking so L.W. could park inside, and then they all three went to Sirleaf's unit.

A 17-year-old Albertville teen was found dead from multiple gunshot wounds in a vehicle in Plymouth Monday evening, and now police are asking for the public's help in finding the suspects.