Albany County District Attorney David Soares said he will ask Attorney General Letitia James to turn over her office's investigative material for a criminal investigation by his office.

NEW YORK - In the wake of the New York attorney general's report that concluded that Gov. Andrew Cuomo sexually harassed a number of women, including a state trooper assigned to his protective detail, the county prosecutor for the state's capital is conducting a criminal investigation into the governor.

Cuomo has repeatedly denied any wrongdoing.

"Along with the public, today we have been made aware of the final independent report from AG Letitia James’ office regarding Governor Cuomo’s conduct as they relate to violations of civil harassment statutes," Soares said in a statement. "We will be formally requesting investigative materials obtained by the AG's Office, and we welcome any victim to contact our office with additional information."

James' investigation, which concluded without making any specific referrals for criminal prosecution, involved interviews with 179 people and presented findings in a scathing 165-page public report that details the governor's pattern of misconduct, including allegations he groped an executive assistant.

Former federal prosecutor Doug Burns told FOX 5 NY that different laws apply to different gradations of harassment and sexual misconduct. Unwanted touching can rise to the level of a crime in New York, he added.

"The statutes are very specific," Burns said. "If you look at criminal statutes, obviously, inappropriate sexual touching can make out a criminal offense."

That means local law enforcement agencies are well within their power to investigate even if the attorney general is pursuing charges.

In his statement, Soares said his office is reviewing the report and "will refrain from any additional public comment at this time regarding the status of the ongoing criminal investigation by our office." 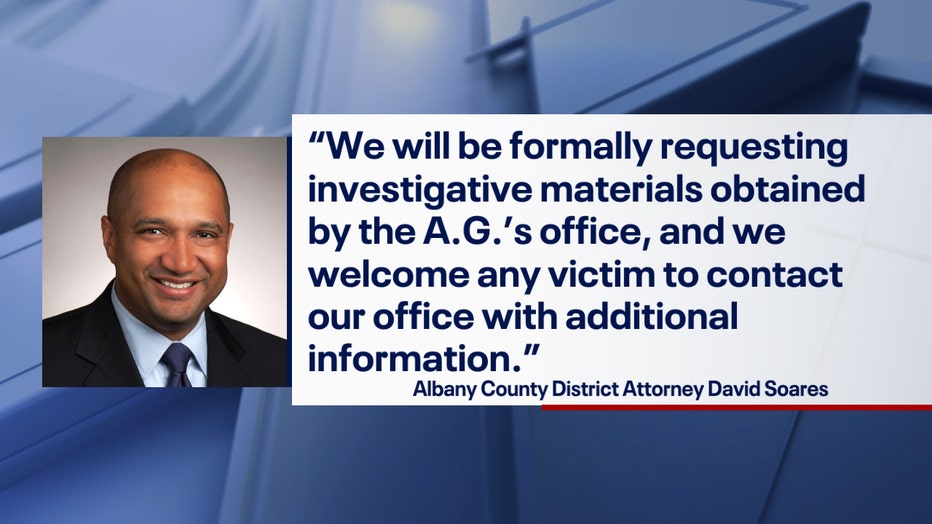