According to Honest Paws, a company that creates CBD products for pets, puppy scams amid the COVID-19 pandemic were up a staggering 280% between April and September.

AKRON, Ohio - It was unthinkable that someone would ever take Julia Nameth’s beloved puppy away from her. But eight years after a home invasion, she was finally reunited with her faithful companion.

In 2012, burglars broke into Nameth’s home and stole her puppy, Junior.

Nameth had trained Junior to be her companion and protector and vowed to never give up hope, spending years searching local shelters and online forums.

At one point she thought she found Junior’s picture on a Craigslist ad, but never got a call back upon reaching out.

She eventually found his picture on the website of the Humane Society of Summit County, Ohio (HSSC). 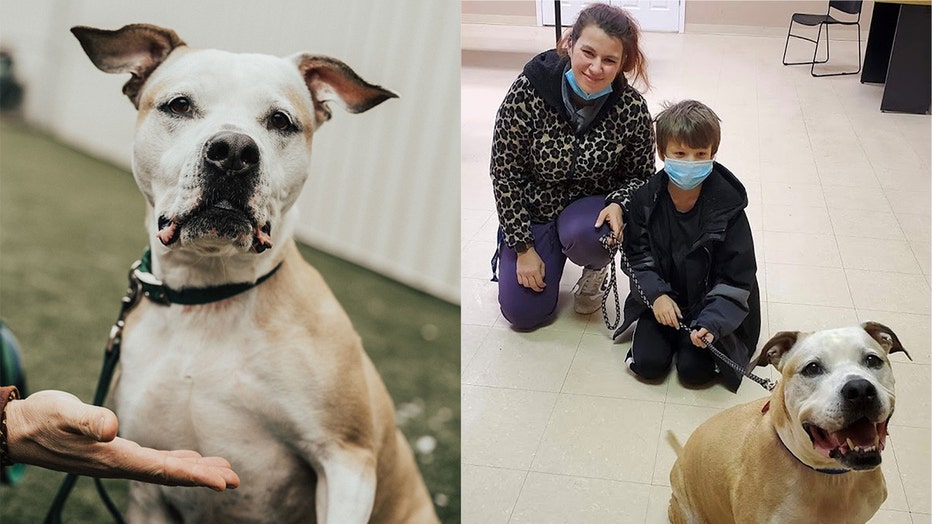 Junior photographed with his long lost family after he was taken in a home robbery in 2012. (Humane Society of Summit County)

During a two-and-a-half year on-and-off stay with the HSSC, Junior would later come to be known as "Buddy," according to the organization.

"Buddy was a staff and volunteer favorite, known for loving chew toys, but was aloof with visitors," the organization wrote on Facebook.

According to HSSC, he entered the organization in 2018 and was adopted by three families, but couldn’t seem to find his forever home.

Then in mid-December of this year, Nameth found a picture of "Buddy" and compared it to her old photos of Junior, thinking they might be a match.

"During the initial meeting, Junior was a bit distracted but instantly connected with Julia, licking his long lost owner’s face as if there was a glimmer of a memory," wrote HSSC.

Junior even remembered the same hand signals Nameth had taught him years ago.

"I keep asking my husband to pinch me because I can’t believe this is real," Nameth told HSSC. "I can’t believe Junior is home. He carried me through challenges of my life and to have him back means everything to me."