Two aspiring actresses who were in their 20s when they met Harvey Weinstein more than 15 years ago took the stand at his trial. They are not the two alleged victims in the case but prosecutors are using their testimony to try to convince the jury the former movie mogul was a serial offender. Reported by Lisa Evers

NEW YORK (AP) - One woman testified that Harvey Weinstein led her to a New York City hotel bed, put his hand up her skirt and fondled her genitals during a 2004 meeting about her fledgling acting career.

Wulff and the woman in the alleged hotel encounter, Dawn Dunning, took the witness stand Wednesday at Weinstein's rape trial, describing a powerful Hollywood figure they say preyed on their vulnerabilities while pushing the notion that sex could lead to film roles. 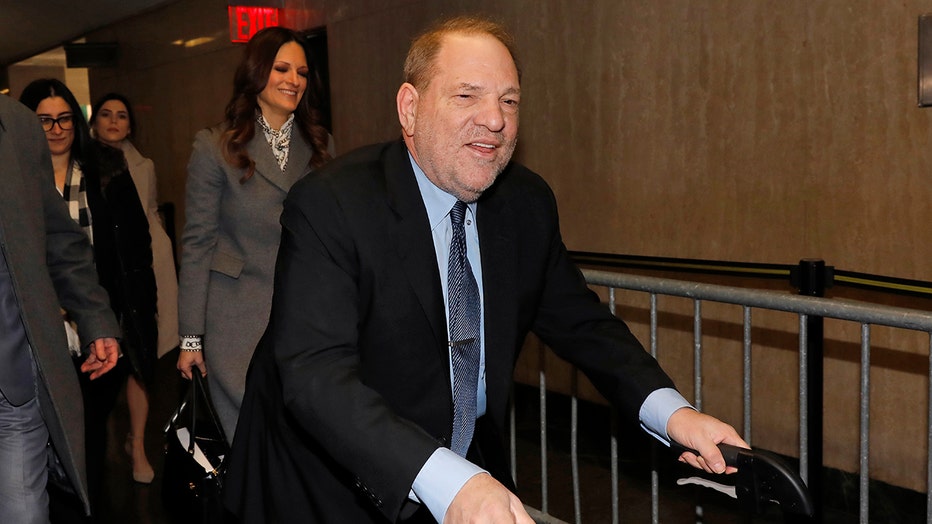 Harvey Weinstein arrives at court for his trial on charges of rape and sexual assault in New York, Jan. 29, 2020. (AP)

Their allegations are not part of the underlying criminal charges, because of the statute of limitations and other legal reasons, but they could be a big factor in whether he goes to prison at the end of the landmark #MeToo-era trial.

"I stood up. I was in shock," Dunning said, fighting back tears as she described a hotel room encounter she said happened when she was 24. "He just started talking really fast. He said, 'Don't make a big deal about this. It will never happen again.'"

Asked by prosecutor Meghan Hast whether she was gaining anything by testifying at the trial, Dunning responded: "No, if anything I'm losing. This is the worst and hardest thing I've ever done."

Weinstein, 67, is charged with forcing oral sex Mimi Haleyi, at the time a "Project Runway" production assistant, in 2006 and raping another aspiring actress in 2013. That woman could testify later this week.

Weinstein has insisted any sexual encounters were consensual.

Manhattan prosecutors are having Dunning, Wulff and a third woman testify under a state law that allows testimony about so-called "prior bad acts," enabling them to explore things like motive, opportunity, intent and a common scheme or plan.

Jurors have already heard from actress Annabella Sciorra, who testified that Weinstein overpowered and raped her after barging into her apartment in the mid-1990s.

A tearful Haleyi testified how she tried to fight off Weinstein before he sexually assaulted her. On Tuesday, Haleyi's former roommate, Elizabeth Entin, took the stand to corroborate the testimony.

The Associated Press does not typically identify people who say they have been victims of sexual assault, unless they agree to be named or gone public with their stories, as Haleyi, Wulff, Dunning and Sciorra have done.

Dunning said she met Weinstein while waiting tables at a Manhattan nightclub where bottle service was a trend for the rich and famous.

Weinstein immediately appeared to take an interest in her fledgling acting career, she said, and invited her to a lunch meeting where, noting his infamous temper, she said he was "on the phone a lot yelling at people."

Several meetings followed, Dunning said, including one at a boutique hotel in Manhattan's SoHo neighborhood where Weinstein was using a suite as a temporary office. At one point, she testified, Weinstein led her into a bedroom and they sat down on the bed.

"I was wearing a skirt that day and he put his hand up my skirt," she testified. "There was no red flags or alerts that would make me expect it to happen."

Dunning said she "just kind of gave him the benefit of the doubt" when Weinstein said it would never happen again. She said she didn't scream or yell and didn't tell anyone because she was embarrassed and didn't want to be a victim.

Dunning said that she later agreed to meet Weinstein at a cigar bar, but that an assistant took her to a suite where the "Pulp Fiction" producer was standing in a bathrobe.

"When he said that, I laughed. I thought he was kidding," Dunning said. "He got really angry; he started screaming, 'You'll never make in this business. This is how the industry works.'"

"He was a big guy; he was towering over me. I was really scared," Dunning testified.

Dunning said that during the tirade, Weinstein mentioned the actresses Salma Hayek and Charlize Theron, as if to persuade her that complying would be good for her career.

Hayek has said that Weinstein repeatedly harassed and bullied her. Theron got angry with Weinstein when some of his accusers alleged he'd suggested they had slept together.

Dunning first told The New York Times about the alleged jobs-for-sex proposals in October 2017, but said she didn't disclose the alleged fondling incident to prosecutors until last summer.

Wulff said met Weinstein while working as a cocktail waitress at a members-only club on Broadway. She said she told Weinstein she was an aspiring actress, though she had never performed before.

After Weinstein led her to the terrace area, Wulff said she noticed his shirt moving.