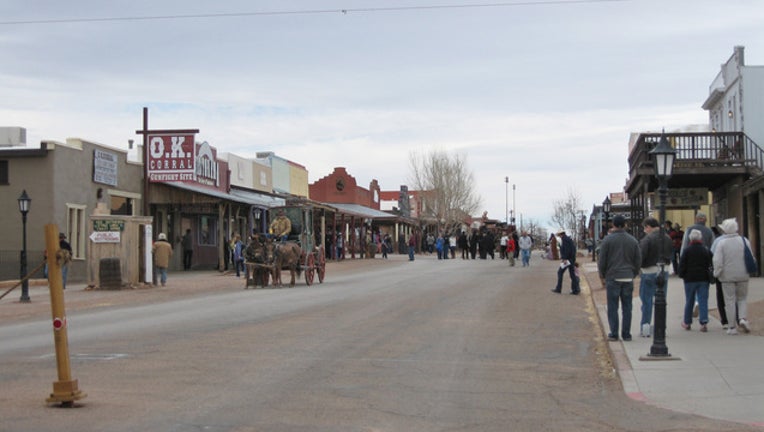 TOMBSTONE, Ariz. (AP) — An actor staging a historical gunfight in the Old West town of Tombstone and a bystander were shot with live rounds during a show that was supposed to use blanks, leading officials to call for the re-enactments popular with tourists to be put on hold.

The shooting happened Sunday afternoon as two performers from the Tombstone Vigilante group re-enacted a gunfight in the 19th century mining town made famous by Wyatt Earp, Doc Holliday and the O.K. Corral.

One of the actor's guns fired live rounds, hitting a fellow member of the group, the Tombstone Marshal's Office said. Ken Curtis fell to the ground and was flown to a hospital in Tucson, where he underwent surgery to remove the bullet.

Curtis was hospitalized in good condition on Monday.

Elyse Palm, a spokeswoman for Banner-University Medical Center in Tucson, declined to give further details about his injuries.

Authorities say a female bystander also was struck Sunday afternoon as two performers from the Tombstone Vigilante group re-enacted a gunfight in the 19th century mining town made famous by Wyatt Earp, Doc Holliday and the O.K. Corral.

At least two bullets struck nearby businesses, with one hitting a female bystander.  Marshal's dispatcher Dee Jackson said the bystander was not seriously injured and refused treatment.

The marshal says authorities inspected the weapon and found one live round along with five casings that indicated the gun was filled with live rounds prior to the skit.

"Tombstone takes pride in the safety and security of its townspeople and tourists alike, and the citizens of Tombstone can be assured that stringent safety protocol will be enforced prior to allowing any further gunfight skits," the marshal said in a statement.

Tombstone, about three hours southeast of Phoenix, was once a bustling mining town in the 1800s that now has about 1,500 residents and mostly caters to visitors who come to see gunfight re-enactments and historical sites.