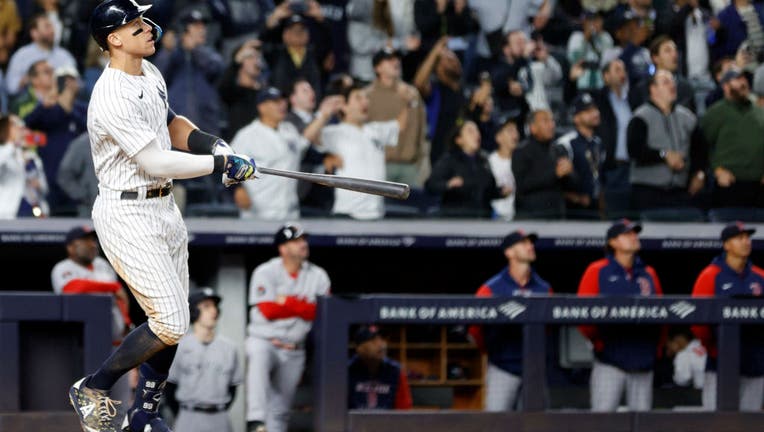 Aaron Judge #99 of the New York Yankees reacts after flying out to center during the ninth inning against the Boston Red Sox at Yankee Stadium on September 22, 2022 in the Bronx borough of New York City. The Yankees won 5-4. (Photo by Sarah Stier/Get

Judge had walked three times and struck out once before he came to the plate with the score tied 4-all in the ninth. The crowd of 43,123 was on its feet for every pitch, and Judge drove a 2-2 fastball from Matt Barnes just to the right of straightaway center.

"Tonight it's a little cool. Maybe it wasn't meant for tonight. Maybe it's another night."

"I just got underneath it a little bit," Judge said. "A pretty windy night, so I was hoping maybe it was blowing out at the time I was hitting, but just missed it."

The ball left the bat at 113 mph, and fans waited in anticipation as Judge jogged toward first base. But they groaned in unison as Kiké Hernández made the catch a step in front of the fence, not far from the 408-foot sign — leaving Judge still one home run shy of the American League record set by Yankees slugger Roger Maris in 1961. 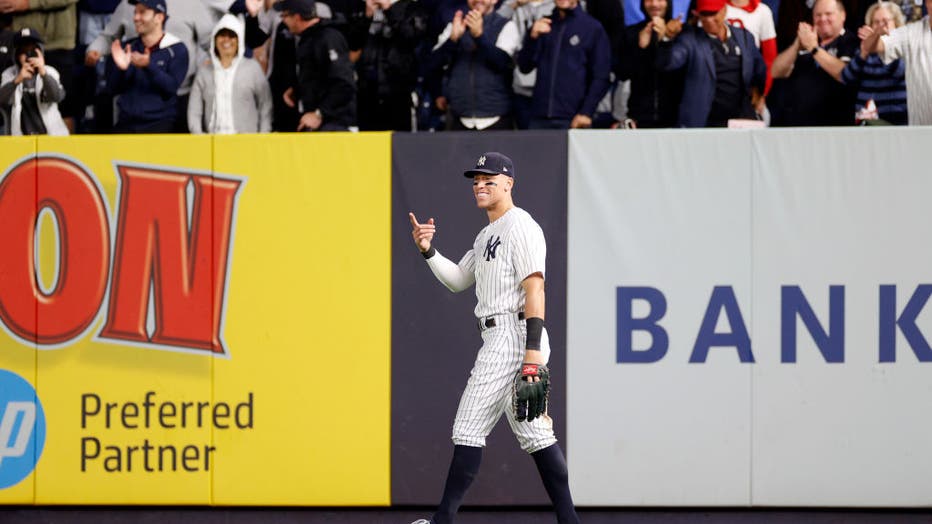 NEW YORK, NEW YORK - SEPTEMBER 22: Aaron Judge #99 of the New York Yankees reacts after making an out with a throw to second during the ninth inning against the Boston Red Sox at Yankee Stadium on September 22, 2022 in the Bronx borough of New York C

"Tonight it's a little cool. Maybe it wasn't meant for tonight. Maybe it's another night," Donaldson said.

"I thought that ball was gone."

Judge also threw out a runner at second base to help hold off Boston in the ninth, showing off his defensive prowess. Tommy Pham hit a one-hopper off the right-field wall against Clay Holmes (7-4). Judge played the carom and from the warning track threw a strike to shortstop Isiah Kiner-Falefa for the tag. It was Judge’s sixth assist of the season.

Then in the 10th, with pinch-runner Marwin Gonzalez at second as the automatic runner, Kaleb Ort (0-2) intentionally walked Gleyber Torres before Donaldson grounded a single just past diving shortstop Xander Bogaerts and into left field.

Giancarlo Stanton hit a two-run homer for the Yankees, and Harrison Bader had a tying sacrifice fly in the eighth after Stanton’s leadoff infield single.

New York has a 7 1/2-game lead in the AL East over Toronto and is headed to the playoffs for the 24th time in 28 years.

"A great accomplishment. A lot of hard work over the course of the season to get to this point," Judge said. "But I think you could ask anybody in this room: The job’s not finished. We have an ultimate goal of going out there and winning our division, and setting ourselves up for the postseason. And this is step No. 1, step No. 1 of many steps to come."

Triston Casas hit a solo homer and pinch-hitter Reese McGuire delivered a three-run drive in a four-run seventh off Clarke Schmidt as Boston overcame a 3-0 deficit.

Aroldis Chapman had another shaky outing for the Yankees in relief, walking two batters with one out in the eighth — the second on four pitchers.

Yankees: LHP Zack Britton (Tommy John surgery) was activated from the 60-day IL and LHP Wandy Peralta (back) was put on the 15-day IL, retroactive to Monday.