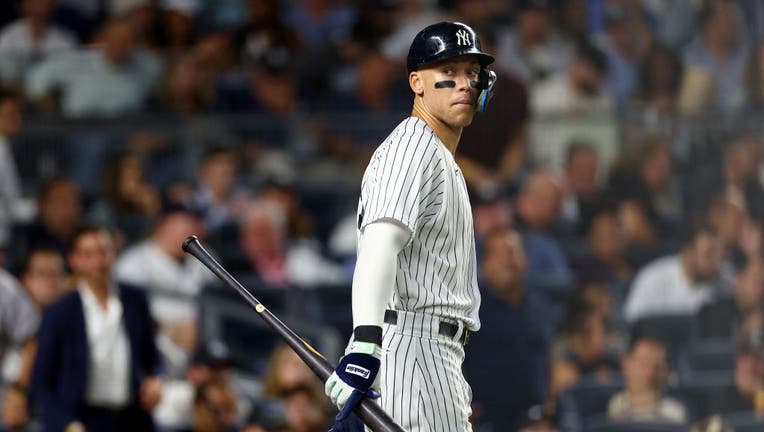 NEW YORK, NEW YORK - SEPTEMBER 21: Aaron Judge #99 of the New York Yankees takes his turn at bat in the seventh inning against the Pittsburgh Pirates at Yankee Stadium on September 21, 2022 in the Bronx borough of New York City. (Photo by Elsa/Getty

ARLINGTON, Texas - The Texas Rangers are struggling through another losing season, but fans are coughing up big bucks for the team's final series against New York Yankees as slugger Aaron Judge looks to set home run history.

Judge has hit 60 homers this year, the second most all-time for an American League player. Judge only trails fellow Yankee Roger Maris, who hit 61 homers in 1961.

Barry Bonds, Sammy Sosa and Mark McGwire have all hit more home runs in a season, but all have been connected to steroids scandals, making Judge's homer the "real" record in some people's eyes.

The Yankees' season ends with four games against the Rangers, from Oct. 3 to Oct. 5, meaning Judge's final dingers of the season could come at Globe Life Park in Arlington.

Fans have taken notice. On Thursday morning, the cheapest tickets on StubHub to the Rangers-Yankees season finale on Oct. 5 cost $6. The cheapest seats in the left field home run porch, where Judge hits most of his home runs, cost $126.

That ticket could be a good investment.

According to the Action Network's Darren Rovell, Probstein Auctions is offering $250,000 dollars for the ball from Judge final home run of the season.

Watch Aaron Judge continue his pursuit of the home-run record book Thursday night when the Yankees host the Red Sox (7:15 p.m. ET on FOX and the FOX Sports App).