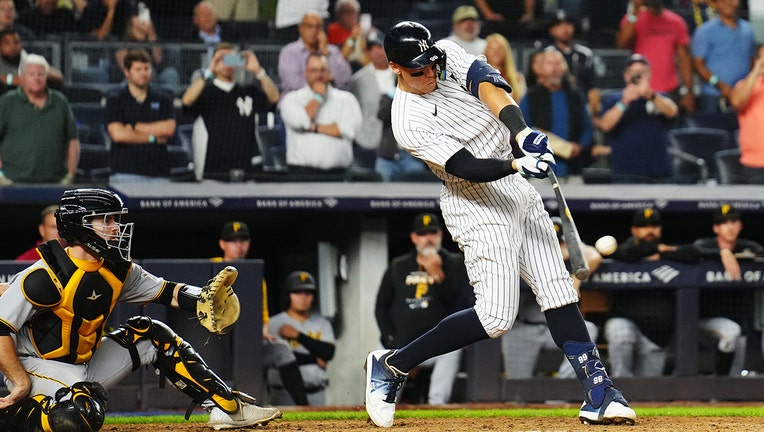 NEW YORK - Aaron Judge hit his 60th home run of the season on Tuesday night, putting him one away from Roger Maris for the American League record of 61.

Judge homered on a 3-1 pitch from Wil Crowe (5-10) to match Ruth's total from 1927, which stood as the big league record until Maris broke it 34 years later.

Roger Maris Jr. and Kevin Maris, sons of the former player, were both on hand to see the home run.

Judge got to 60 in Game 147 — no debate on the length of the season, like what surrounded Maris' pursuit.

No one else in the majors has more than 40 homers.

"To be that far ahead of the field," Yankees manager Aaron Boone marveled, "it's hard for me to grip."

Judge is on pace to hit 66.1 home runs this season.

He'll get his next chance on Wednesday.  New York RHP Luis Severino (5-3, 3.45 ERA) starts Wednesday after recovering from a lat strain that has sidelined him since July 13. RHP Roansy Contreras (5-4, 3.24) pitches for the Pirates.