Those convicted would face federal felony charges, fines and up to seven years in prison.

WASHINGTON - Lawmakers in the U.S. House of Representatives unanimously passed a bipartisan bill that would make animal cruelty a federal felony.

The Preventing Animal Cruelty and Torture Act, or PACT Act, would make it easier to prosecute those involved in the gruesome killing of animals.

Specifically, the bill prohibits the intentional acts of crushing, burning, drowning, suffocating, impaling or otherwise subjecting animals to serious bodily harm. Those convicted would face federal felony charges, fines and up to seven years in prison.

The bill was introduced in January by Rep. Ted Deutch, D-Fla.,and Rep. Vern Buchanan, R-Fla., to criminalize certain acts of animal cruelty that were not included in the Animal Crush Video Prohibition Act, which was signed into law in 2010.

It aims to close a loophole in the 2010 law, which only punished abuse in videos. 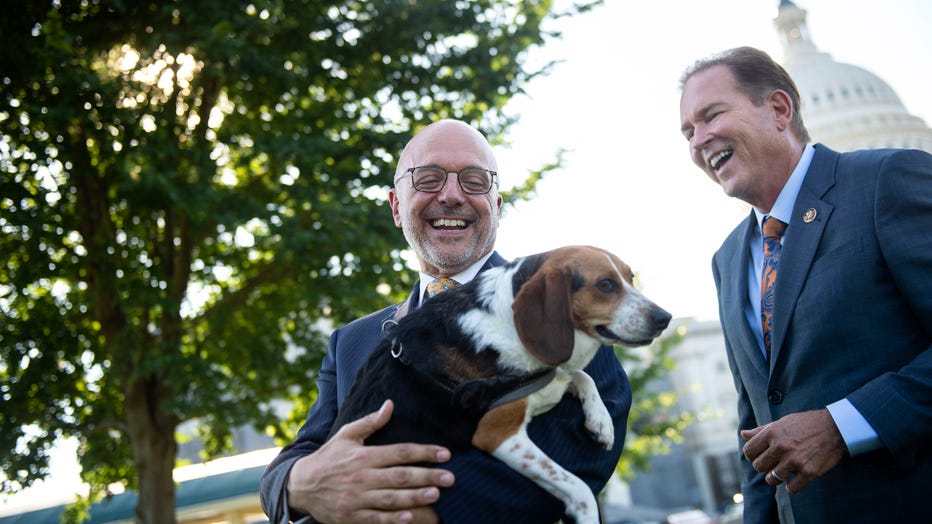 Rep. Ted Deutch, D-Fla., left, and Rep. Vern Buchanan, R-Fla., play with a dog before a news conference about calling for the passage of federal animal cruelty law on Capitol Hill on Monday July 15, 2019. (Photo by Caroline Brehman/CQ Roll Call)

“Most people are shocked to know that the U.S. does not have a federal animal cruelty law,” Animal Wellness Foundation Director of Federal Affairs Holly Gann said in a press release.

The PACT Act will next go to the Senate.

According to the Orlando Sentinel, the Senate unanimously passed the PACT Act twice before, earning 284 bipartisan House co-sponsors and more than 200 law enforcement endorsements in the previous session of Congress. But the measure was blocked in the House from coming to the floor by former Judiciary Chairman Bob Goodlatte, R-Va., who is no longer in Congress.

"Today’s vote is a significant milestone in the bipartisan quest to end animal abuse and protect our pets. This bill sends a clear message that our society does not accept cruelty against animals," Deutch said Tuesday. “I’m deeply thankful for all of the advocates who helped us pass this bill, and I look forward to the Senate’s swift passage and the President’s signature.”

Buchanan said the torture of innocent animals “should be punished to the fullest extent of the law.”

“Protecting animals from cruelty is a top priority for me and I will continue to work with Congressman Deutch to get this important bill signed into law,” the Florida lawmaker added.