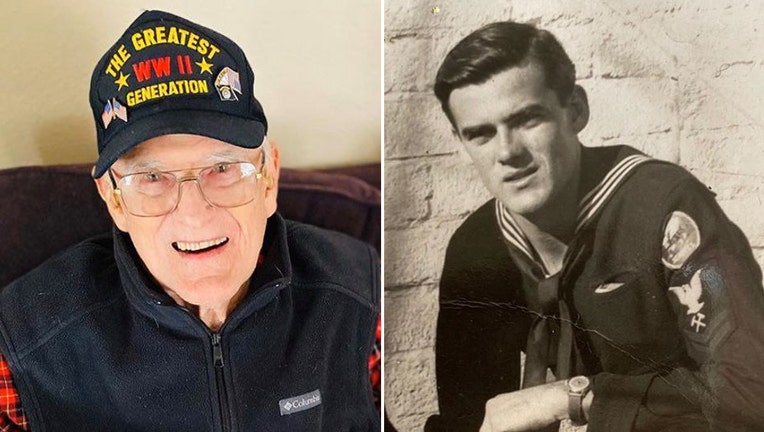 MCMINNVILLE, Ore. - A 95-year-old World War II veteran who beat the odds and survived the novel coronavirus said on “Fox and Friends First” on Friday that listening to his doctor’s orders to stay positive helped him recover.

Bill Kelly, a Navy veteran from Oregon, described his symptoms as being “quite tired” and not having an appetite.

“I had to force myself to eat and to get my strength up,” he said.

He added, “I did get plenty of rest and I did obey the doctors and nurses requirements what to do and to do it with a positive attitude.”

Related: Recovered patient who spent 10 days on ventilator sent off in style by hospital staff

“They mentioned to me a lot of this is psychological too in a person’s mind and to have a negative attitude about something, it does affect that,” Kelly continued.

He said his thoughts as he was fighting COVID-19 were, “’Do what you are told, go to sleep and get rest and things will work out. Have a positive attitude and get with it.’”

In a Facebook post last month, Rose Ayers-Etherington, 41, revealed her grandfather’s diagnosis but added he was “kicking it in the butt.”

“In his words, ‘I survived the foxholes of Guam, I can get through this [coronavirus] bull—-,'” she wrote. “He has strong mental resolve. He has seen tough times and knows how to get through them.”

On Friday she described what it was like when she first heard her grandfather contracted COVID-19. She said that she first noticed Kelly wasn’t feeling well on March 15.

“We all live together, there’s four generations in this house right now, I came home and I just noticed that he’d been in bed. He just didn’t want to get up,” Ayers-Etherington said.  “He just didn’t look like he was feeling very well and I asked him how he was feeling and he was like, ‘You know I am just not feeling great.’”

“He was complaining of really bad body aches as well, his legs, his lower back, so I took his temperature, he had a low-grade temperature so I called his doctor, and they were like, ‘Yeah you better bring him in,’ so we did and it was kind of scary because they just took him and we couldn’t be with him at all. We just had to go home and wait to hear from the doctors,” she continued.

She said the doctors called her the next day and told her that he could be discharged.

“They were like, ‘OK we got his fever down, we think it’s some bug, some virus, nothing major, you can come get him,’” Ayers-Etherington said. “They were not going to test him and the only reason they did is because my husband is a MedEvac helicopter pilot and has been transporting COVID-19 patients so they were like, ‘We better test him just to make sure’ and lo and behold … he found out that he was positive.”

Ayers-Etherington said her grandfather was diagnosed with COVID-19 on March 17.

When asked how he is feeling now Kelly said, “I feel fine, still a little tired.”

“I am gaining strength day by day, but other than that I’m coming along just fine,” he continued.

Oregon is reporting 1,132 coronavirus cases and 29 deaths, according to data compiled by Fox News.