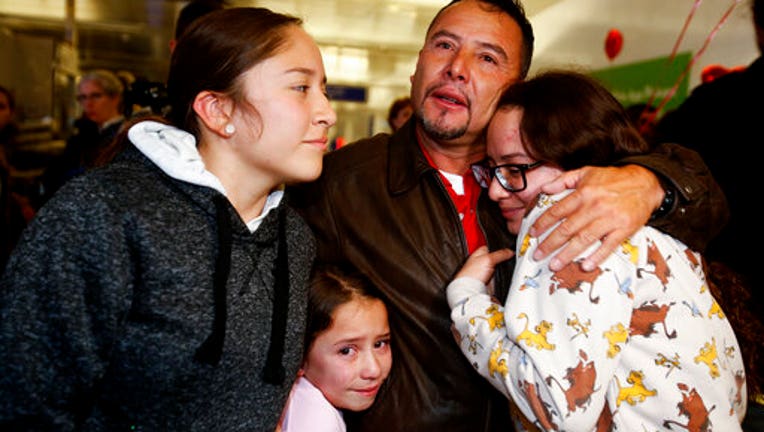 Esvin Fernando Arredondo of Guatemala reunites with his daughters Andrea, left, Keyli, right, and Alison, second from left, at Los Angeles International Airport after being separated during the Trump administration's wide-scale separation of immigran

LOS ANGELES (AP) — As his long-lost son walked toward him in an airport terminal, a sobbing David Xol stretched out his arms, fell to one knee and embraced the boy for about three minutes, crying into his shoulder.

He had not held the child since May 2018, when border agents pulled then-7-year-old Byron away inside a detention facility. They were separated under President Donald Trump's zero-tolerance policy — the father deported to Guatemala, the son placed in a series of government facilities before ending up with a host family in Texas.

Xol was one of nine parents who won the exceedingly rare chance to return to the U.S. after being deported under family separation. They arrived Wednesday at Los Angeles International Airport to be reunited with children they hadn't seen in a year and a half or longer under the order of a federal judge who found the U.S. government had unlawfully prevented them from seeking asylum.

After embracing, David stood and patted Byron, now 9, on the head. “He was small,” the father said. “He grew a lot.”

The reunion was a powerful reminder of the lasting effects of Trump's separation policy, even as attention and outrage has faded amid impeachment proceedings and tensions with Iran. But it also underscored the fact that hundreds, potentially thousands, of other parents and children are still apart nearly two years after the zero-tolerance policy on unauthorized border crossings took effect.

“They all kind of hit the lottery,” said Linda Dakin-Grimm, an attorney who represents one of the parents returning to the U.S. "There are so many people out there who have been traumatized by the family separation policy whose pain is not going to be redressed.”

More than 4,000 children are known to have been separated from their parents before and during the official start of zero tolerance in spring 2018. Under the policy, border agents charged parents en masse with illegally crossing the U.S.-Mexico border, then placed their children in government facilities. The policy drew condemnation from around the world as stories emerged almost daily about screaming children, some as young as babies, forcibly taken away from parents.

The U.S. has acknowledged that agents separated families long before they enforced zero tolerance across the entire southern border, its agencies did not properly record separations, and some detention centers were overcrowded and undersupplied, with families denied food, water or medical care.

At least 470 parents were deported without their children, in many cases because they were told to sign paperwork they couldn't read or understand. Some of the kids were held in U.S. government facilities and ultimately placed with sponsors, usually family members. Others were deported to their home countries.

The U.S. Department of Homeland Security referred a request for comment to the Justice Department, which did not respond.

The American Civil Liberties Union, which brought the original family separation lawsuit before Sabraw, asked the judge to order the return of a small group of parents whose children remained in the U.S. In September, Sabraw required the U.S. to allow 11 parents to come back and denied relief to seven others.

Byron anxiously waited for his father to clear immigration authorities and emerge in the terminal so they could be back together for the first time since that fateful day on the border.

The mother who has taken Byron in and escorted him to the airport for the reunion tried to calm his nerves: “They’re almost here, you’re doing great,” Holly Sewell said. "Count to 1,000.”

Esvin Fernando Arredondo was also on the plane. The father from Guatemala was separated from one of his daughters, Andrea Arredondo — then 12 years old and now 13, after they turned themselves in on May 16, 2018, at a Texas crossing and sought asylum legally, according to his lawyer. Sabraw found that Arredondo had been deported after his order to the U.S. government not to remove any more parents separated from his children.

Andrea was separated from all family for about a month, living in a shelter as the government struggled to connect children with their parents because they lacked adequate tracking systems. She was finally reunited with her mother, who had turned herself in at the Texas crossing with the other two daughters four days earlier than her husband, on May 12, 2018.

She and her two daughters passed the initial screening interview for asylum, unlike her husband, even though they were fleeing for the same reason. Their son Marco, 17, was shot and killed by suspected gang members in Guatemala City.

Arredondo eventually emerged with the other parents. He hugged his three daughters. One of the girls, wearing a pink sweatshirt with Mickey Mouse and other Disney characters, held onto his chest as he spoke to reporters through his tears.

“To live the way I lived was very difficult,” he said.

His wife, Cleivi Jerez, 41, arrived at LAX less than an hour before the flight landed with their three daughters in tow. She planned to stay up late catching up with her husband before he has to report to an ICE office Friday in San Diego. Alison Arredondo, 7, said she missed going to the park with her father and she wanted to go to one with him in LA.

According to Holly Sewell, Byron grew three pant sizes and two shoe sizes just in the last six months. She said he has become “much more secure” and sometimes describes what his life was like in detention, especially if he sees stories about immigrant children on the news. His English has developed to the point that they no longer use a translation app to communicate.

Holly Sewell said she was thrilled Byron could see his dad again but sharply criticized the U.S. government's treatment of asylum-seekers.

While the U.S. has stopped the large-scale separations, it has implemented policies to prevent many asylum-seekers from entering the country. Under its “Remain in Mexico” policy, more than 50,000 people have been told to wait there for weeks or months for U.S. court dates. The Trump administration also is ramping up deportations of Central Americans to other countries in the region to seek asylum there.

“People want to make this a heartwarming story, but it’s not. It’s devastating,” Sewell said. “There is just no good reason why we had to do this to this child and this family. And he symbolizes thousands of others who have been put in this exact same position.”