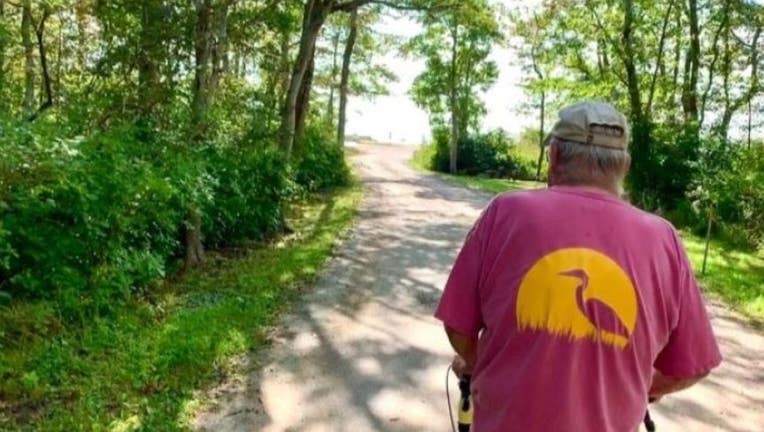 After three decades, Brad Hathaway accomplished his goal on Oct. 3, logging 24,901 miles — the equivalent of circling the globe at the equator. ( A Walk Around the World for Mattapoisett Land GoFundMe/Twitter)

LOS ANGELES - An 88-year-old Massachusetts man has completed the ultimate achievement: walking nearly 25,000 miles — equivalent to the total circumference of the Earth.

It’s a feat that Brad Hathaway took 32 years to accomplish, beginning in 1988 when he found out he was at risk for heart disease and diabetes. Hathaway’s doctors advised he get more exercise.

After three decades, Hathaway accomplished his goal on Oct. 3, logging 24,901 miles — the equivalent of circling the globe at the equator.

"I found out a few weeks ago from a fellow walker that if I went from pole-to-pole, I could save 20 miles," Hathaway told news station WESH 2.

Kevin Kinard, a 33-year-old from Arkansas, found the second-largest diamond ever found in Crater of Diamonds State Park's 48 year history.

RELATED: Man finds 9.07-carat diamond, thought it was a piece of glass

WESH 2 reported that Hathaway walked the final mile with friends and family to celebrate his accomplishment.

“The fact that he was diagnosed with Parkinson’s last December only added to the challenge but failed to deter his efforts,” the walk’s GoFundMe account stated.

The GoFundMe is dedicated the Mattapoisett Land Trust, which Hathaway co-founded in 1974, to acquire and protect land in Mattapoisett — land where Hathaway walks.

RELATED: ‘Love my commute’: Man participates in National Bike to Work Day while working from home

Hathaway hopes his story is a message to get out and be active.