Fifth Avenue closed off for several hours Sunday to become car-free, party of the launch of Fifth Avenue for All, marking the city's largest-ever holiday season-specific open street.

NEW YORK - Sunday was the official kick-off of Fifth Avenue for All, a new program that transforms 5th Avenue from 47th-57th Streets, into a pedestrian-only experience every Sunday in December.

Part of the city’s open streets initiative for the month of December, many are hoping it will become New York City's latest holiday tradition.

"There’s no better way to partake in the magic of the season than to walk this great avenue, with world-class shopping, dining, and cultural institutions."

Sunday was the official ribbon cutting. Usually, around Rockefeller Center, the Adams administration now expanding Open Streets to 11 city blocks, including Fifth Avenue— for the first time in a half-century. 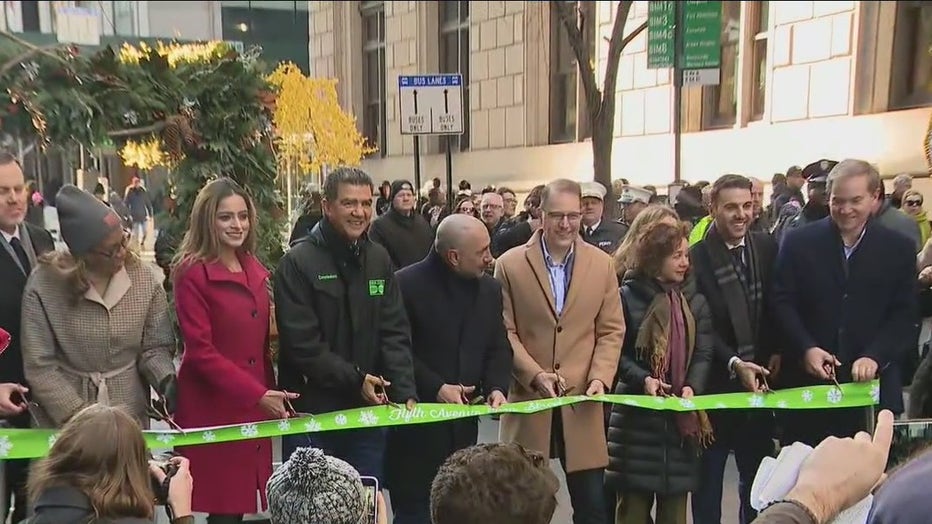 Lawmakers cut the ribbon to open Fifth Avenue for All.

"There’s no better way to partake in the magic of the season than to walk this great avenue, with world-class shopping, dining, and cultural institutions," said 5th Ave Association Board Chair Ed Hogan.

City officials hope to send a message through Open Streets, that New York is back, thriving with energy.

Residents and millions of tourists are invited to grab a warm drink, take a stroll in the middle of 5th Avenue and "As the mayor always says, please spend money," said Chief of Staff Frank Carone.

Local businesses are hoping to cash in on the extra foot traffic, picking up after pandemic shut-downs, but set to spike this holiday season, as the city anticipates 6.5 million visitors for a year-end total of 56.4 million. That’s 85 percent of the 2019 record.

You have two more opportunities to visit before Christmas, next Sunday the 11th, and the 18th. The 11 blocks go car free from noon until 6 p.m.