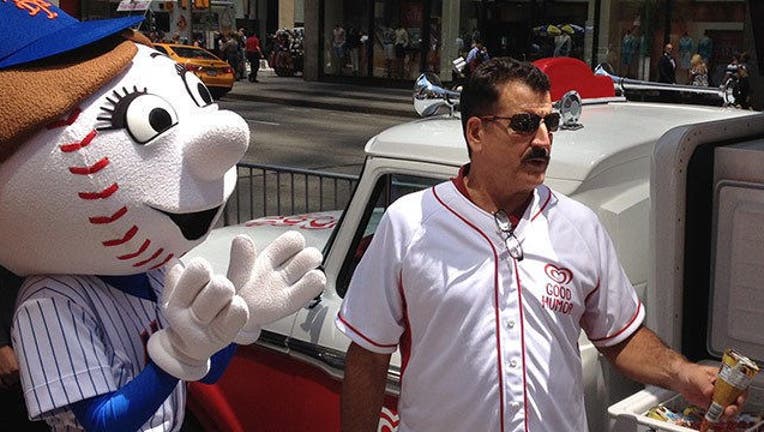 Last week, I met New York Mets legend Keith Hernandez, now a baseball analyst on SNY. He was promoting an event with Good Humor to announce a summer campaign. Good Humor men will be popping up around the city to hand out free frozen treats. (The promotion ran through July 14.)

I'm a Yankees fan, but as a kid I also followed the Mets because my mother and several friends were Mets fans. I remember those 1980s teams -- Doc, Straw, Mookie, Mex. When my family moved to Italy in 1985, I fell out of touch with baseball. So in late 1986, my mom and I had to watch the now-classic Game 6 of the World Series on a VHS tape that a friend brought back from the States. (Talk about tape delay.)

Hernandez played 17 seasons for the Mets, St. Louis Cardinals, and Cleveland Indians. He was the National League's MVP in 1979 when he won the batting title with a .344 average. He was a five-time All-Star, 11-time Gold Glove winner at first base, and a two-time World Series champion.

Last week, I watched Keith hand out free ice cream and pose for pictures with dozens of fans, most my age and older. I had but a few minutes with Hernandez, and squeezed in these quick questions.

1. Baseball and ice cream go together. What kind of memories do you have from childhood about the Good Humor man or ice cream trucks in general?

KEITH: Well, I grew up on the West Coast, so I can always remember chasing after them. Couldn't wait for ice cream truck. We heard the music, run to Mom for some money, and go get ice cream.

2. What is the most memorable moment for you from the 1986 World Series?

3. Do you think of yourself more as a Met or a Cardinal?

KEITH: Oh, that's a tough one. Both. I don't have real favorite. I had great times in both places. [He won the World Series with both teams.]

4. Mets fans appreciate your baseball commentary. But I imagine they'd like to see you in uniform again, too. Would you consider managing or coaching?

KEITH: No, it won't happen. Definitely not.

5. When you appeared in "Seinfeld" more than 20 years ago, could you have imagined your episode would become such a seminal sitcom moment that is still talked about and watched today?

KEITH: No, not at all. I was very fortunate. Absolutely not. [People still talk about it] all the time.

5½: Whose mustache is more famous: yours or Tom Selleck's?