At least six more lawsuits have been filed against Houston Texans quarterback Deshaun Watson, bringing the total filed up to 13.

HOUSTON - A 15th and 16th lawsuit has been filed against Houston Texans QB Deshaun Watson in the Harris County District Court on Tuesday afternoon.

In the 16th lawsuit, a woman, who is licensed in body countouring and skin tightening services in Houston, said Watson harassed her by exposing himself and trying to force her to touch his private area.

In the 15th lawsuit, a woman, who is a licensed and certified professional, who owns her own business in Houston, stated that he exposed himself to her and made other sexual advances.

Prior to the release of the 15th lawsuit, Rusty Hardin, the attorney for Houston Texans QB Deshaun Watson released a statement on Tuesday following the multiple lawsuits filed against his client.

"I want to emphasize at the outset that we and Deshaun recognize that sexual assault and harassment are not only unlawful, but morally wrong. It takes courage for women to come forward to report being mistreated, particularly when they attach their names to a lawsuit. We do not take these allegations lightly. However, fairness to the accused is equally as important.

Opposing counsel has orchestrated a circus-like atmosphere by using social media to publicize 14 "Jane Doe" lawsuits during the past seven days in a manner calculated to inflame the public and malign Deshaun’s otherwise sterling reputation. In addition, the tactic of refusing our requests to confidentially provide the names of the plaintiffs so we can fully investigate their claims makes uncovering the truth extremely difficult. Anonymity is often necessary as a shield for victims but opposing counsel has used it as a sword to publicly humiliate Deshaun before the truth‑seeking process can even begin.

I believe that any allegation that Deshaun forced a woman to commit a sexual act is completely false. And in the one case in which we have been able to identify a plaintiff, we have strong evidence showing the allegation is false. In January of this year, a woman attempted to blackmail Deshaun by demanding $30,000 in exchange for her "indefinite silence" about what she stated was a consensual encounter. It is our belief this woman is the plaintiff in Cause No. 2021-15613. (Please see the declaration by Bryan Burney below.) This calls into question the legitimacy of the other cases as well.

We have received numerous unsolicited comments in the past week from many licensed massage therapists who have worked with Deshaun in recent years. These women describe him as a gentleman and a model client who never engaged in inappropriate conduct. Indeed, before these salacious claims, everyone who associated with Deshaun described him as an outstanding, respectful, and compassionate man.

Again, we are taking the allegations very seriously but we ask only that people not rush to judgment, that people not be unduly influenced by opposing counsel’s antics, and that they let fundamental fairness to both sides rule the day. Thank you for your patience and understanding."

On Tuesday evening, Tony Buzbee, the lawyer who is representing the numerous alleged victims, tells FOX 26,

"Alleged sexual misconduct is serious. Attempting to criminalize or minimize those that speak out or step forward is wrong. I have been asked to respond to a released statement by Mr. Watson’s counsel.

My first reaction is that there have been so many massage sessions from Instagram that Mr. Watson can’t keep track of them—recall he, on Twitter, initially criticized me and denied everything. I can’t tell you how many people have stepped forward to report similar conduct or provide information. That info will be released, again in public filings—not in the media. My second reaction is a question: why would his marketing agent admit Watson had sex for pay with a massage therapist, consensual or otherwise? We will also provide a copy of the non-disclosure agreement that Deshaun Watson and his marketing manager repeatedly insisted that Jane Doe (and others) sign after (and sometimes before) the "massage session," which she refused to sign. I do appreciate Mr. Hardin’s professionalism and his words of support for victims, but would respectfully suggest there are many facts here, that we will put in public filings, that Mr. Hardin might not be aware of. We will provide additional details in a statement, consistent with our ethical obligations in due course. I’m hoping we can do so by Friday."

1.    My name is Bryan Burney. I am the marketing manager for Houston Texans quarterback Deshaun Watson, and have had this role for more than three years. I have personal knowledge of the facts stated in this declaration; they are true and correct.

2.    In mid-January 2021, I spoke with an individual who I believe is the Plaintiff, identified as "Jane Doe," in Jane Doe v. Deshaun Watson, Cause No. 2021-15613, currently pending in Harris County, Texas. It is clear to me that the person I spoke with met with Deshaun on December 28, 2020, the same day that Jane Doe contends in her petition that she met with Deshaun. When I spoke with Ms. Doe in January, she stated that she wanted a "settlement" from Deshaun, though what exactly she wished to "settle" was not clear to me.

3.    During my discussions with Ms. Doe, I questioned the factual basis for the "settlement" that she was requesting from Deshaun. Ms. Doe informed me that she was asking to be paid $30,000 for what she referred to as "indefinite silence" about her encounter with Deshaun. I asked her what she would be silent about and whether anything had happened with Deshaun against her will. She confirmed that everything that occurred was consensual during her encounter with Deshaun. I asked Ms. Doe why Deshaun should pay for silence regarding something that was consensual – whatever it was. She said that it was a matter that both she and Deshaun would wish to keep secret and that she would need to be paid for her "silence."

4.    After my conversation with Ms. Doe, I received a call from a man purporting to be her "business manager." Ms. Doe’s business manager told me that her encounter with Deshaun would be embarrassing if revealed and that Deshaun should pay to keep the matter secret.

5.    I told this individual that his demand to be paid for not revealing a consensual interaction between two adults was extortion.

7.    I informed this individual that Deshaun would not be paying the $30,000 requested.

8.    In the years that I have known Deshaun, I have known him to be a respectful, decent human being. I do not believe him capable of the conduct that "Jane Doe" has anonymously accused him of in this case. This conduct is also completely inconsistent with multiple statements made by Jane Doe and by her "business manager," indicating that her encounter with Deshaun involved only consensual activity.

The women, identified as Jane Does in the lawsuits, accuse Watson of assaulting and harassing them during massage sessions.

The following content contains graphic details that may be disturbing for some readers. Discretion is advised.

In one of the lawsuits filed Monday, a licensed massage therapist from Georgia accuses Watson of "touching her with his penis and exposing himself."

In another lawsuit, a Houston woman who offers bodywork and stretch therapy services accuses Watson of grabbing her "buttocks and vagina, touching her with his penis and trying to force her to perform oral sex on him" during massage sessions.

In the third lawsuit, a licensed massage therapist in Houston accuses Watson of "exposing himself to her, touching her with his penis and making sexually suggestive comments." 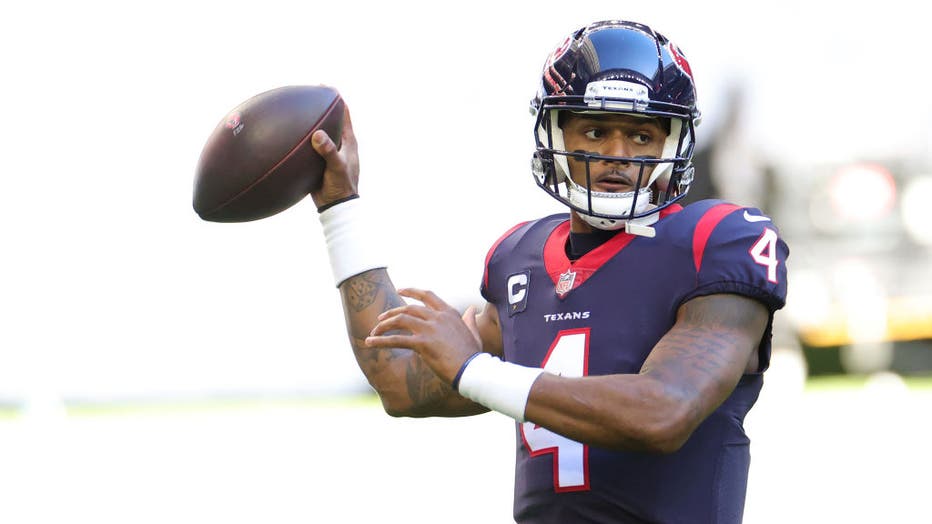 HOUSTON, TEXAS - JANUARY 03: Deshaun Watson #4 of the Houston Texans in action against the Tennessee Titans during a game at NRG Stadium on January 03, 2021 in Houston, Texas. (Photo by Carmen Mandato/Getty Images)

In the fourth lawsuit, a Houston woman who offers wellness therapy services accuses Watson of "exposing himself to her" during a session.

In the sixth lawsuit, a Houston esthetician accuses Watson of "touching her with his penis and exposing himself" during a session.

In the seventh lawsuit, a licensed massage therapist from Los Angeles accuses Watson of "exposing himself to her and touching her with his penis".

The seven newly filed lawsuits are in addition to the seven lawsuits filed against Watson last week.

EXPLICIT: READ THE LAWSUITS BELOW

All of the women are identified as Jane Does in their respective civil lawsuits.  They are each seeking compensatory and punitive damages, as well as court costs.

The NFL confirmed the matter was "now under review of the personal conduct policy", and the Houston Texans said they will stay in close contact with the league as they investigate.