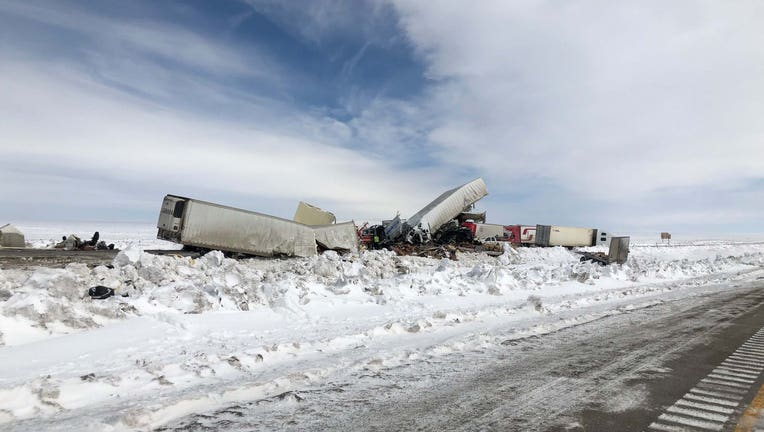 RAWLINS, Wyo. (AP) — At least three people died and dozens were injured in a pileup involving more than 100 vehicles amid blowing snow that closed part of Interstate 80 in Wyoming, officials said Monday.

The pileup and another one nearby around the same time involving 40 vehicles happened in snowy, blustery weather Sunday about 180 miles (290 kilometers) west of Cheyenne.

About 30 people were taken to the emergency room at Memorial Hospital of Carbon County in the small city of Rawlins, hospital spokeswoman Stephanie Hinkle told the Casper Star-Tribune.

Officials at the 25-bed hospital expected more injured people to arrive Monday. They called in three extra doctors and set up a temporary patient holding area in a cafeteria.

The smaller pileup, on I-80 just 4 miles (6 kilometers) away from the larger pileup, injured at least seven people, including one person who was hospitalized in critical condition, Sweetwater County Sheriff's Office spokesman Jason Mower said.

A 200-mile (320-kilometer) stretch of westbound I-80 from Laramie to Rock Springs was still closed Monday and Wyoming Department of Transportation officials did not expect it to reopen until early Tuesday.

Forecasters predicted snow driven by wind up to 50 mph (80 kph) would continue affecting travel until Tuesday.