The USGS reports it happened at approximately 6:55 p.m. EST outside of Detroit Beach, which is in Monroe County about 40 miles south of Detroit. The USGS initially reported it with a 3.4 magnitude.

A 3.2 magnitude earthquake was reported Friday night in Monroe County, with many reporting they heard a loud boom right beforehand and others thinking they saw a plane crash.

FOX 2 received numerous calls and emails from viewers saying they felt tremors, some even big enough to shake the house. No injuries or major damages have been reported.

Reports into the USGS say the effects were felt as far north as Sterling Heights and as far south as Bowling Green, Ohio. 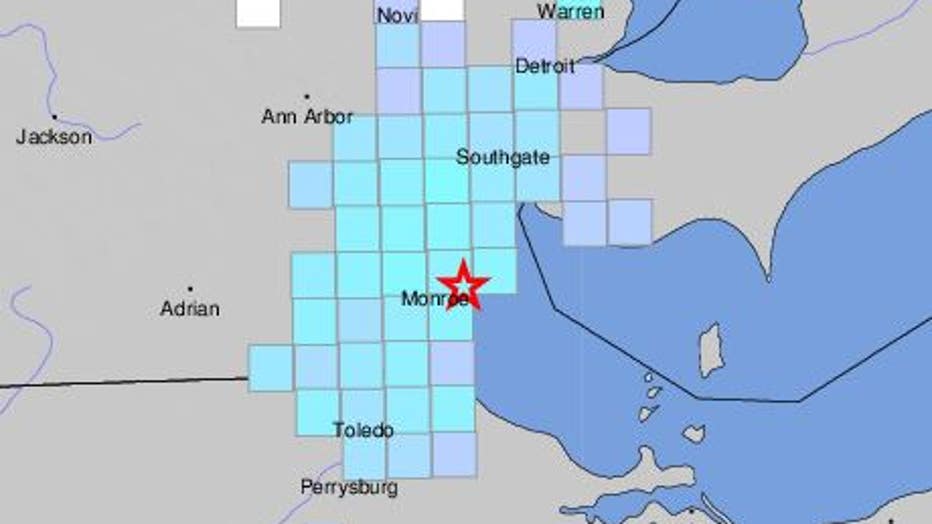 Some people report hearing a loud boom before they felt the shake. And chatter about a plane crash in the area spread almost as quickly as news of the earthquake. One person told us they saw smoke on the water.

"People all across the country, even all the way up to Metro Airport, heard the boom, whatever that was. And someone saw what we believe was the seaplane doing some touch-and-gos and we believe what they saw, what they saw was smoke, was actually the mist from the seaplane touching the water," said Lt. Ron Hoskins from the Frenchtown Township Fire Department.

Coast Guard area fire department rescue boats searched the water for more than an hour but did not find anything.

Earthquakes aren't common in Michigan. In fact, it's an event that happens once about every five years.

So how do these earthquakes happen here in Michigan? We're not on any big tectonic plates, but there are smaller fault lines that run around the state. And when there's movement in those fault lines it can cause an earthquake, though they'll typically be pretty small as we've experienced.

How and why do earthquakes happen in Michigan?

Earthquakes aren't common here in Michigan, considering we're not on any big tectonic plates. So how they happen?

If you have photos or video from the earthquake and would like to share, contact the FOX 2 News Desk at 248-552-5103 or by emailing us at fox2newsdesk@foxtv.com.