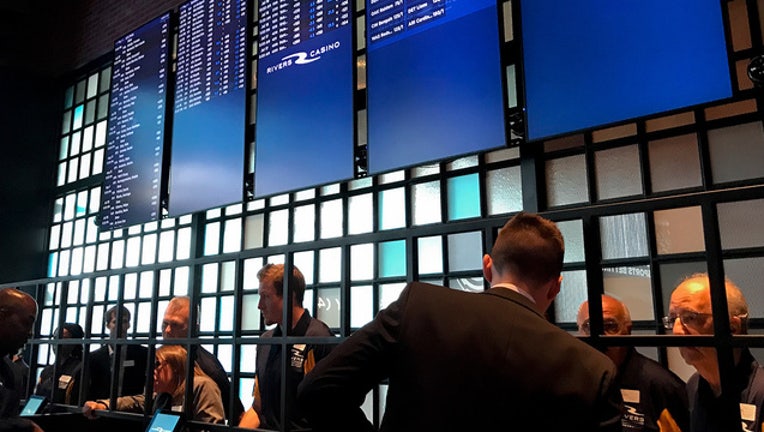 Employees at Rivers Casino and Resort prepare for the opening of its sports betting lounge in Schenectady, N.Y., July 16, 2019. (AP)

ATLANTIC CITY, N.J. (AP) - Gamblers wagered more than $293 million on sports in New Jersey in August, helping Atlantic City's casinos win 13% more than they did a year ago.

The two newest casinos also fared well in August. Hard Rock retained the No. 2 spot in the market with nearly $41 million, up nearly 31% from a year ago.

And the Ocean casino had the best month in its short history, with over $25 million, up more than 25% from a year ago.

Both were in only their second month of operation in August 2018 and were fighting to grab market share in what had been a smaller competitive environment.

"We continue to see strong volumes, highlighted by a 42% increase in our slot business" compared with a year ago, said Michael Donovan, Ocean's senior vice president and chief marketing officer.

The Borgata said it won $219 million in land-based gambling revenue in June, July and August, in what casino president Marcus Glover called "record-breaking success." He attributed the performance in part to significant capital investment in the property and strategic promotions to customers.

Harrah's was the only one of the nine casinos to post a decline in August, at $31.2 million, and that was down less than 1%.

James Plousis, chairman of the New Jersey Casino Control Commission, said the casinos' performance during the summer, traditionally their strongest period, shows that operators have made necessary adjustments to a market that is larger than it was a year ago.

"These results show there is a great deal of customer interest in Atlantic City's offerings," he said.

Monmouth Park in Oceanport, near the Jersey shore, had just over $2 million in revenue, up from nearly $899,000 a year ago.

Resorts Digital had nearly $6.7 million in revenue, up from $2.9 million a year ago.

The state's casinos and tracks collectively made $25.2 million in revenue on the $293 million in bets they handled in August.

This story has been corrected to show that the casinos and tracks collectively handled $293 million in sports bets in August, not $339 million.